I've been taking my time formulating my ideas for my goals and intentions for 2013.  Because, I finally realized that they are mine, and technically don't even need to be recorded for/reported to anyone else.  However, one of the main purposes I started this blog was to write for myself, and keeping track of goals and intentions is one way to check myself throughout the year without feeling like I may have forgotten something.

One of my intentions and goals has already been reached.  I was really itching to review my stash, and did so last weekend.  I try to do it at least twice a year, but I had decided that it was just time to say goodbye to yarns that, even if I loved them and they were beautiful, I was just not likely to ever use.  I decided I was going to be ruthless.  And though I could probably have been even more ruthless than I was, I had a lot of stuff to give away and/or sell.

First - the yarn, bags, needles to give to Interim House, here in Philadelphia.  They have a Knitting Club for their residents, and it is wildly popular.  As a result, they have a hard time keeping everyone in supplies!  (Last year, we collected for them at Christmastime at Rosie's, and it was a huge success.  This year, I didn't have my act together, so it was a no-go.)  Anyway, I decided that besides "lesser" yarns that I had, the knitters deserved some of the nicer stuff as well.  By the time I was finished, I had jam-packed two large boxes (the kind that bottles of wine are shipped in) with LOTS of goodies. 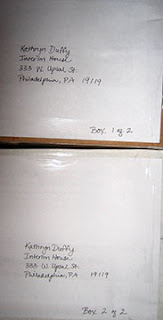 I always like knowing that I can find a new and good home for my yarn.  :-)

The yarn that I didn't send to Interim House, I was going to sell on Ravelry.  But then I realized that there was so much, by the time I photographed it, uploaded it, and described it, months might pass.  And the whole purpose of this exercise was to move things out of here NOW.  So, I've decided to so something a little bit different, and create "Mystery Boxes."  What are those?  Well, I'll take a few boxes, fill them with various yarns, and sell them for an all-inclusive price.  Any given box could contain laceweight yarn, sock yarn, a sweater's worth of yarn - you get the idea.  I queried a couple of Ravelry forums about this idea, and though some responses made it sound as if I were trying to send Komodo dragons in the mail they were so incensed at the idea, there were a lot of people who thought it sounded like fun.  I figure it's worth a try.  So stay tuned, 'cause I'll be posting the Mystery Boxes here for your perusal as well.

Reviewing my stash is such a good thing for me.  It reminds me of what I already have, what I can let go, and what things I am likely to actually use.  I am really going to try my best to knit from my stash as much as it's possible this year, and ideally, I would like to have made a reasonable dent in the remaining stash by the time I am ready to review it again.  Granted, some of the yarn is already designated for specific projects, but unless those projects actually get started or finished, the yarn isn't going anywhere, right?

Next up: trying to decide what to knit/who to knit for this year.  That's gonna take me a little bit longer to determine.  But I'm on my way!
Posted by Bridget at 7:54 PM
Labels: 2013-goals, charity, mystery-boxes, stash

Good for you, I destashed over the summer, it is a bit numbing to realize how much yarn you have lurking in bins. Love idea to give it to those women.
Have a great week,
Meredith

I bet shipping a Komodo dragon costs a LOT.

You should call the boxes "Mystery Dragons"-

The thing about having a sizeable stash is our tastes change as our skills improve, so buying ahead isn't always a good idea.

But then, sometimes, the joy is in the owning.

Oh my, so many kindred souls. I don't need an inch of yarn---but can hardly resist the appeal of a mystery box! Bring 'em on!!

I de-stashed over the summer myself.

Don't you love all that indignation? You try to do something nice/feasibly easy and it's astounding how many folks will get their knickers into a knot.

Marvelous ideas, both! Especially the donations. Very proud of you.

Destashing can feel so good! I'm not sure if I would ever buy a box of mystery yarn, but I would love to see what ends up in them! ;)

Heck, I'd BUY a Komodo dragon on purpose. What's wrong with people, anyway? No sense of adventure.