Or, When Science and Knitting Meet!

As you may have gathered from reading various posts, I do not have a close relationship with many of my co-workers.  Some of them are just like anyone else you might meet - pleasant, but we don't have anything in common other than where we work.  Others are - to be perfectly honest - downright disagreeable.  This is not really a problem, as I would just as soon spend my free time with people other than those at work.

Having said all of that, there are a few knitters, crocheters, sewists, etc.  A few years ago, someone tried to start a lunchtime knitting group.  I went a couple of times, and it was fine, except there was one woman who felt the need to criticize everyone else's work, so I gave up on that.  That woman has since moved on, and right before Christmas, one of the people from that group and I were talking, and we thought we might try to get a group together again, and focus not just on knitting, but any kind of craftiness or making.  Of course, everyone knows the most important thing is to think of a name, right???  (Not really, but work with me here.)

I thought of a name, but it was knitting-centric.  So even if that won't end up being the name of the group (should said group actually come into existence), we decided we needed to use the "character" as our mascot and logo.

Are you familiar with Tiktaalik roseae?  I mean, you really should be.  (Not really, but once again, work with me.)  Tiktaalik is a pretty important discovery, evolutionally speaking.  And one of the team of paleontologists who discovered it is our supervisor, so I said if we wanted to suck up, we should name our group Knit-taalik.  (This discovery also landed said supervisor a visit to "The Colbert Report," which pleases me to no end.)  Well it turns out that we were completely enamored of this name and idea, and so we *had* to bring it to life somehow.

Well, our biggest obstacle is that neither of us has any drawing capabilities.  We knew what we wanted, but neither of us would be able to get even remotely close.  And that is when we realized that we had the perfect person right here at work in the form of Jason Poole.  Jason is one of the nicest, funniest people here, and he is just as happy to do something whimsical as he is something scientific.  So we mentioned Knit-taalik to him, and met him over a lunch hour to discuss it.  He loved it, as his mother and grandmother were both knitters, so he "got" our ideas.  He said he would do some sketching, and get back to us.

Today he brought us the resulting image, and it was even better than anything we were imagining!  Recently, the Academy changed its logo (don't get me started on that), and frankly, everyone agrees it looks a lot like a ball of yarn.  Well, Jason incorporated it into Knit-taalik without making it obvious to anyone who wouldn't know.  Also, the discovery of the actual fossil was made in the Arctic, so he/she needed to be warm.  Again, Jason knew just what to do.

Ladies and gentlemen, let me introduce you to Knit-taalik: 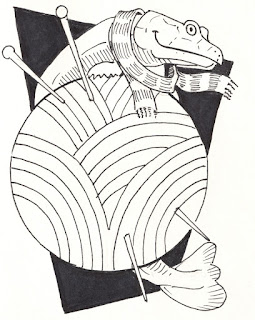 
It was a nice start to the work week, let me tell you!
Posted by Bridget at 3:05 PM
Labels: Knit-taalik, knitting, science, work

That's awesome -- both the name and the logo! Great job!

I ❤️ it! You're going to have fun with this new group.

I love it. The logo, the name and I love that you've found away to enjoy crafting at work with a few like-minded folks. Enjoy. It's so nice to have something positive like this when we spend so much time at work.

Excellent! I love this Bridget, especially since it means you might enjoy a few hours at work! The sketch is wonderful!

You win for the coolest blog post today! I loved Neil Shubin's "Your Inner Fish" and the Tiktaalik story, and am excited to read about your connections. With Jason's amazing logo, your group is off to a great start. I'd surely buy the Knit-taalik t-shirt!

That’s adorable! I wish I could join!

What Vera said, Plus One!

Great logo for a project bag. Thanks for the link to Jason's work; he is so talented.

That's fantastic! Sounds like your group is off to a great start!

Are you going to call yourselves 'the rosies' for short?