Hello all!  The sun is actually out this morning, and the sidewalks are dry - who'da thunk it??

On top of which, it's Wednesday, which means the work week for me is officially half finished (a HO, if you will), and that is good news.

I thought I would chime in on Unraveled Wednesday, since I was able to get some projects underway last week while I was on vacation, and some books I had on hold at the library arrived - when it rains it pours, right?

I don't remember where I read about this book, but it sounded like something that would be a good read.  So far, I've been reading it on my lunch hour, so I'm not making quick progress, but I am finding it really interesting and want to keep going.

Knitting-wise, I'm making good progress on the gift socks I'm making.  I just finished the gusset, so it's onto the foot and toe of the first sock.  I think part of the reason it's going so quickly is because I really like the yarn I'm using (Fiberstory Fave Sock).

I also started my Crazytown Cowl, and find the pattern to be quite addictive, once you "get" how it's going to work.  I cast on and then ripped back and cast on again after a few rows five different times before the light bulb went on, and it has been smooth sailing from there.  Since this photo was taken, I've already completed another section. 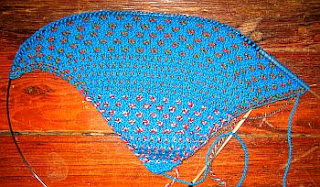 The pattern, by the way, is The Shift, by Andrea Mowry.  I realized last night that my Neverender was also an Andrea Mowry pattern, which is weird, because I didn't consciously decide to make two of her patterns in a row.  I didn't consciously decide not to, either, but you know what I mean.  I do have to say that based on these two knits, her patterns are very well written and clear.

Now that I have had success with knitting a few garments, I will admit to kind of having an itch to knit something for the summer - a short-sleeved or sleeveless item.  The problem is that I am trying very hard to use stash yarn, and most of what I have is wool, with the occasional blends of wool and alpaca, or wool and acrylic.  Granted, I wouldn't need as much yarn as a "regular" sweater would take, but I also don't really have the cash to buy non-wool yarn (or any yarn) at the moment.  So maybe I'll plan ahead for fall and use some yarn that I already own.  Who knows, I may also decided that my cross-stitch project is my third thing and stick with that, at least for now.

Decisions, decisions, you know??
Posted by Bridget at 8:28 AM
Labels: Unraveled-Wednesdays

Nice projects Bridget! Love that blue. I think Kat read that book and recommended...I've been looking for it on Overdrive (no luck yet).

The sun shining in my window woke me up this morning, and it was a welcome sight after the past three gray and rainy days. I'll be interested in seeing more of your Shift as you progress. The colors are great, and I'm glad you can knit and make knitting plans again!

And, I have been thinking lots about your Shift... I am spinning for a Nightshift, but I am wondering which I might wear more, and Shift keeps drifting around my brain.

But, at least they are FUN decisions to make.

Hope the back end of the work week goes quickly.

I've got the itch for a summer knit too but so far I've come up with nothing that interests me.

That cowl is so neat!

I picked up the Italian Shoes, too. Maybe I heard about it through Unraveled Wednesdays. :)

The blue Shift looks intriguing. I hope the end of the week treats you well.

I've lost my knitting mojo at present. Usually that means quick knit stuff so I can get it back.

That blue is so saturated and brilliant, and the pattern looks lovely!