I am happy to report an FO - these were actually finished a week ago tomorrow (Saturday), but I didn't have them blocked and photographed until now.  These are the socks I knit for a friend's husband who is having a kidney transplant this coming summer.

The first sock went pretty quickly, and soon I'd started the second. 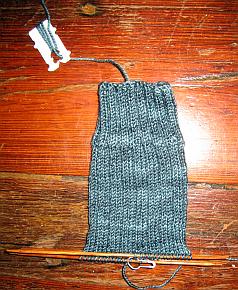 The second sock zipped along - mainly due to the fact that I needed something to occupy my mind over the past week, and knitting fit the bill.  Since these were just plain vanilla socks, they were a perfect project.  And I think the finished pair look great. 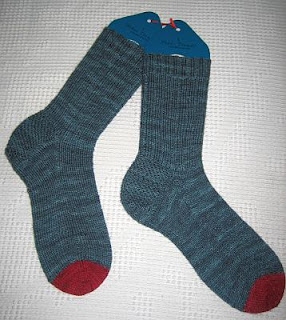 Project:  Socks for Brian
Pattern:  Classic Socks for the Family, with a 2 x 2 rib on the cuff, 3 x 1 rib on the leg, and an  Eye of Partridge heel
Yarn:  fiberstory FAVE sock, in the colorway Tranquil; the toes are Knitted Wit Gumball in the Cranberry Bog colorway
Needles:  US size 1
Modifications:  None
Notes:  This turned out to be a wonderful project on several levels.  I actually bought this yarn, because since I don't know Brian that well, I wasn't sure if he would like bright or wild socks, and that is most of the sock yarn I own.  When I saw this color, I not only liked it, but the name of the colorway - Tranquil - seemed perfect for him, since hopefully his life and health will be more tranquil once the transplant happens.

The yarn is so lovely - tonal, and so incredibly lofty and soft to work with.  It takes a pattern really well, and I can imagine that a textured pattern would look great using this.  I was a little bit nervous that I would not have enough yarn for both socks, since the yardage is slightly less than I'm used to, so I decided to jazz them up with a different color toe.  The Knitted Wit Gumball in Cranberry Bog seemed like a good combination, and I love the way they turned out.  (As it turns out, I would have had enough of the other yarn, but I didn't want to agonize since these were a gift, and I wanted them to be an enjoyable project for me).

I took these with me when we went home over the Memorial Day weekend, to add in some extra good juju.  While we were there, I showed my niece Amanda and her husband Patrick how they were coming along, since they are the ones who are really good friends with Brian and his wife Nancy.   Then I had the brilliant idea to have them knit a few stitches, for even better juju.  So Amanda knit about five stitches, and Pat did three stitches.  They were both nervous and worried that they would mess them up, but both of them did just fine, and I think they were surprised that it "worked."  There are some thoughts and prayers of Jack included as well.

I figure with all the goodwill and good thoughts in these socks, Brian's recovery should be smooth and hopefully without issues.  :-)

If you are reading this, you've made it through another week.  We don't have any plans for the weekend, which is fine, since we are still taking it one day at a time.  I hope that whatever you have planned - or however you decide to just relax - makes your weekend a good one!
Posted by Bridget at 6:45 AM
Labels: 2019-box-o-socks, 2019-knitting, fos, Jack, knitted-gifts, socks, weekends

Those socks are packed full of wonderful, from the Tranquil color, the bright toes, and all the good juju. Perfect transplant socks!

Great finish Bridget! I love that a few stitches were contributed by others and the pop of red on the toes is great! Well done.

That cranberry toe makes them extra gifty! They're special for sure.

We're getting rain all weekend, so we're trying to decide what our plan will be. Not sure if it's worth heading to the lakehouse or not. (But at least rain gets us out of a lot of yard work!)

Okay, first . . . THOSE TOES! I love them. I think these are the most wonderful gift-socks, Bridget. From the Tranquil color to the stitches-with-friends, these will be perfect for your friend Brian. Well done! XO

I can feel the juju from here!! Those toes are perfection!

LOVE!!! And, truly... those toes! They beg the wearer to kick off their shoes and flaunt those vibrant toes!

One day at a time is how we are all supposed to live! Have a relaxing weekend. LOVE YOUR SOCKS

They turned out great. Brian is going to love his new socks.

The socks are such a thoughtful gift! And I love that the colorway is called "tranquil." That also seems appropriate.
I know what you mean about avoiding yarn chicken. That's a game I never enjoy. The contrasting toes turned out very cute.