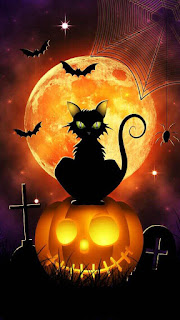 It's here - the spookiest day of the year - HALLOWEEN!!!  On my way to work today, I saw a few witches, a couple of Harry Potters, a Ninja Turtle, and tiny little toddler twins dressed as Thing One and Thing Two.  It's always fun to see the costumes of the kids who are clearly having a party or something at school/daycare.  (The parents usually just look tired, as you'd expect.)

When I was a kid, I used to be SO JEALOUS of my oldest sister Nancy, because her birthday is November 1.  And whenever we were all in a Catholic school (we moved a lot, and attended whatever school was closest to where we lived), the next day was All Saints Day, and a day off from school.  So not only did she have Halloween, and a day off the next day, but it was HER BIRTHDAY and so she got cake and presents!  So jealous.  :-)

Last year we had zero trick-or-treaters, which was extremely disappointing.  This year, I bought only one big bag of assorted candy, so that if it's all or mostly left over, we won't be eating as much.  But in the way things work, it could also mean that since I didn't buy as much candy as usual, a cast of thousands will show up, who knows?

In any event, I hope that your day and evening today is full of treats rather than tricks.  And that it's a Happy Halloween. 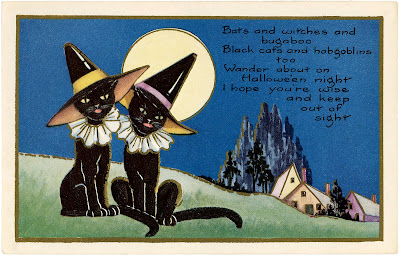 Posted by Bridget at 7:55 AM
Labels: halloween

Wow! Your sister really lucked out!!! We usually get LOTS of trick-or-treaters at our house . . . but this year, I won't be home to help out (my watercolor class is on Tuesday nights. . . ). Tom and my Dad (and the dogs) are ready to hold down the fort, though -- with a big bowl of chocolate. YUM! XO

We had less than a dozen kids last year and the word in our neighborhood is that it will be even less this year, so we are not doing anything. It makes me kind of sad, but we did not want the candy laying around afterwards.

Many churches here have Harvest Festivals. The children can go from car to car in the parking lot where the people hand treats out of their trunks. It's safer for the children than going house to house.

Happy Halloween!!! I'm like a big kid today-full of candy and mischief!

We started opting out of T&T long ago. It simply stopped being fun.The kids who showed up were not from our community and were not even...Kids. We pull the curtains, leave our porch light off, and have dinner.

We're going to be cold and windy; I feel bad for any little ones out tonight!

Happy Halloween! If we buy candy, we get no one...if we don't buy candy they show up. Fletch ran out yesterday and grabbed two bags (stuff we like...just in case...). Love that last picture of the two kitties in hats.

Bridget- It's sad. Kids aren't into it the way we were.

Hope you get at least a few trick-or-treaters.

We were at Willow Grove Park Mall and saw a few kids making the rounds.