I don't know about you, but when I find the perfect gift for someone, it makes me soooo happy!  When I find something to *make* that is perfect for someone, I feel even happier.

A few months ago, I purchased this cross-stitch pattern from Etsy.  When I first saw it, it screamed "Please make me for Amanda!" (my niece, for those who don't know).  At the time I was in the throes of another project, and it's one thing to have two things going with knitting, but I knew that if I had two cross-stitch projects going, it would not end well, and neither would be finished for a looooong time.

So the other project was finished and it was time for the next one.  In theory, I wanted to give it to her for Halloween, and though I wasn't sure I'd finish it this year, one of the best things about holidays is that they show up every single year.

Kat had sent me some really lovely gray cloth that she had in her stash, and I thought I was all set.  So then I started to look for the floss to use.  Well, out of the LARGE amounts of floss I inherited from my mother, there was not one single strand of black.  Four hundred shades of blue, a thousand shades of red, etc., but no black at all.  So I looked at the A.C. Moore near our house.  The craft section is actually not that extensive - it's near an art school, so it is more geared towards that.  But as I mentioned in yesterday's post, when The Tim said he was heading to Home Despot, I went along to check out the larger A.C. Moore near there, and BINGO, black floss!!

Saturday, late in the afternoon, I sat down to start.  And it was clear that - at least in my opinion - the gray cloth would not provide enough contrast to suit me with the black floss.  So I poked around some more in my mom's stuff, and found some slightly-lighter-than-cocoa cloth, and got started.  By the end of the Notre Dame football game, I had this: 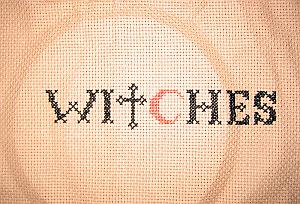 (the fabric is darker, the flash washed it out)

I knew this would be the most involved part, since the letters were the most "filled out" so to speak.  I just love the way it turned out (though I realized much later that the "T" was missing a stitch on the crossbar - now a design feature ...).

Sunday, in between other activities and during part of the Eagles game, I completed the "Not All" segment, and last night after paying bills, I got the "Live In" part done.  I really really like the way it looks. 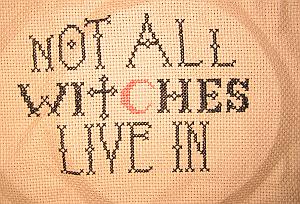 This is so much fun to stitch, and after I stitch "Salem" I will have only the little decorative parts to do.  Then if The Tim is inspired to frame it (and I think he will be, since he truly dotes on Amanda), it can reach her by *this* Halloween!  So exciting, and I cannot wait for her to receive it.

So that's my entry today for Tiny Needle Tuesday.  I may just have to stitch one of these for myself sometime, you know??
Posted by Bridget at 7:52 AM
Labels: family, gifts, Tiny-Needle-Tuesday

LOVE!! Oh my, that is so cute! And, you are really flying along!

I think the Design Feature looks much more gothic.

I like finding/making the perfect gift for people, too. It's difficult to wait, then, to give it to them!

I too love finding the "perfect" present. I've got one on my Christmas list that I know the recipient is just going to die for! I can't wait.

I love you cross stitch!

That is such a wonderful gift! Yes, you definitely need to make one for yourself. Looking forward to seeing it framed.

Hahahah Such a cute phrase. Do make one for yoU!!!

beautiful story of your stitching project and I love the saying immensely!

LOVE it! So glad it's all coming together for (hopefully. . . ) Amanda to get it THIS Halloween! XO

I love it and your niece is going to be thrilled!