Did any of you watch the original Mickey Mouse Club as kids?  On Tuesdays, they would sing:

Today is Tuesday,
You know that that means?
We're gonna have a special guest!

[and then I forget most of the rest until  the end]

Well, because I can remember that, instead of current things that I actually need to remember, I sing that to myself every Tuesday as I'm walking to work.

Which - other than it being Tuesday today, has nothing to do with this post.

I have two "Finallys" for you.

Finally #1 - Packages for the winners during Christmas in July.  They were packaged and ready to send out, and The Tim offered to take them to the post office, since he passes one every day on his way to and from work.  So, I assumed they were on their way.  Then one day last week, he brought them inside, with the packaging kind of mangled.  He had put them in the back seat and forgotten all about them.  In the meantime, various things had happened which had really messed up the packaging.

So I re-packaged everything, and FINALLY got them in the mail to the winners last Friday.  Hopefully some/all of you will receive them soon, but at least now you can be on the lookout.  Of course, once they were all sent, I realized that I had re-packaged them, but had failed to include the notes I'd written and put in the packages.  Sigh.  Oh well, they are in the mail, that's what is important, right???

Finally #2 - Guess what?  It's Tiny Needle Tuesday, and my honeybee cross-stitch has been completed! 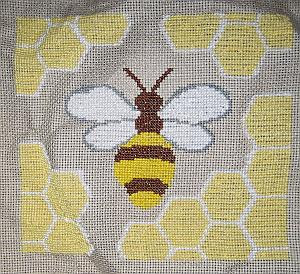 Clearly it needs to be blocked, and I want to find a frame for it, but the actual stitching part is finished, and I love it even more than I thought I would.  This is from a kit I purchased a few years ago, from a company called Modern Needlework.  (I think a shop on Etsy, though I don't see them there any more, so that's really no help, is it?) Anyway, it was a lovely kit and the charts were easy to read and follow.  I'm looking forward to finding a frame and hanging it.  It's got some mistakes, but overall, I'm pleased with how well I did, considering it had been easily 20 years since I did any counted cross-stitch at all!

Next up will be the item for my niece Amanda, which I *think* I can finish before Halloween and send to her.  It's pretty small, and not dense at all.  If it's not finished in time - well, Halloween comes every year, right?  I want to pull out the cross-stitch supplies I inherited from my mother to see if I already have the colors of floss I need before I purchase any, but either way I should be able to start in the next week or so.

I am particularly pleased that my laptop cooperated to I could upload the photo - maybe things are beginning to improve, technology-wise.  I'm keeping my fingers crossed ... :-)
Posted by Bridget at 8:06 AM
Labels: christmas-in-july-2019, Tiny-Needle-Tuesday

Your honeybee project looks great! I certainly can't see any mistakes. It will make a lovely framed piece, whether hung or propped on a little easel for a tabletop decoration. I like it.

That Bee piece is just too cute - well done!

The bee is just adorable! It looks perfect to me. It's a piece that has so much potential to fit in with other decor. Happy Tuesday!

I did watch MMClub as a kid (in re-runs, but the original version) and I DEFINITELY remember the Today is Tuesday song! (My sister and I sing it from time to time, when appropriate . . . like on a Tuesday when we're traveling together, because it's a SONG THAT REALLY STICKS.) (I also remember how to spell e-n-c-y-c-l-o-p-e-d-i-a from the Encyclopedia song. . . .) Anyway. Brilliant bee stitching! I just love it. XO

Couldn't be any cuter!

(Yeah, I avoided the cutesy pun. You're welcome.)

Your bee looks lovely!! And, I do remember the Mickey Mouse Club (and I heard the song in my head as I typed that! LOL)

Your bee is fantastic!