Hello - I hope this finds you well, and not too awfully wilted from the heat.  I hope that any of you who are Canadian had an enjoyable Canada Day yesterday, even if it was a bit toned down.

Today I've decided to take part in Three on Thursday, and I'm sharing three wishes I have.  Now keep in mind, I do of course wish the virus was gone, and that we had a different president, and that all of us valued each other as much as we would like to be valued - but those are things that I call Big Wishes, and feel that most people have similar things in that category as well.  Instead, I'm sharing three wishes that are either just mine, or that may overlap somewhat with others' wishes.

1.  I wish I didn't have to keep hearing about people's ruined vacations.  Listen, I get it, I know that when you have a vacation planned - whether it's a week off at home, or the trip of a lifetime - it's beyond disappointing to realize that for whatever reason it won't be happening.  But I am SO tired of hearing about how people's trips to Europe or the Caribbean or wherever has had to be cancelled because of Covid-19.  Hearing it one or two times is understandable.  But I know people who have mentioned it every single time they possibly can.  And though I can sympathize, I wish they would realize that for most of us, "vacation" is a few day trips, maybe attached to a long weekend, and that summertime just means being at work like most of the rest of the year because we do not have the leave time or the money to afford a trip anywhere.  So hearing them whine about a summer of lost privilege makes me want to play a tiny violin, if you get my drift.

2.  I wish that people would stop saying that "anyone can grow succulents," because they take no care at all.  Every single time I have had a succulent, whether I love it too much, ignore it altogether, or carefully follow instructions for its care, the plant just dies almost immediately.  I really like a lot of the different ones, but never, ever, has one lived once it's in my possession.  I have met a couple of other people who have had the same experiences, and all of us find it upsetting.  I love having plants, and wish I could make these grow, but apparently where they are concerned, I'm the kiss of death. 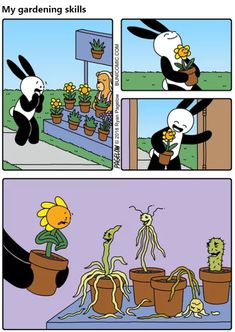 3.  I wish I had not watched the last episode of the season of the show "What We Do In the Shadows."  It's one of my favorite shows, and we do re-watch episodes from both seasons, but like most things, seeing them the very first time is always the best.  It's so ridiculous, and doesn't want to do anything but make you laugh.  I mean, just the premise - vampires who live in Staten Island - is enough to make me chuckle whenever I think about it.  The movie that originated it was good too, but the show is just stupid for all the right reasons.  One of the characters is an "energy vampire" and you quickly realize that we all know someone who is just that.


The Tim and I also find the theme song convenient for so many occasions ... ;-)

Go over to Carole's blog and see what three things everyone else wanted to share!
Posted by Bridget at 8:45 AM
Labels: covid-19, plants, three-on-thursday, TV

I was talking about how succulents are so tricky this morning! I can grow food plants, houseplants, no problem! Succulents have always alluded me and my aloe plant is finally circling the drain and I'm pretty much ready to just compost it and get another houseplant to fill the pot. It's almost like when folks say tomatoes are so easy. They are not. They are tricky too.

I think those wishes are great. I am over the vacation stuff too because guess what most of us don't get paid vacations, at least I don't. I am watching Offspring on Netflix, it is like the Australian Parenthood and I can't get enough of it. It is funny, witty and sad and I love the characters. Stay safe.

I can't grow anything so I get the succulent thing. I have one very sickly Philodendron and they are supposed to be fool proof. Not with me. I've had it for years and it's very sad.

You are singing my song. A cancelled trip to Europe is not a significant problem during a pandemic. I have friend who can't stop talking about the three overseas trips she had to cancel for this summer and fall.

My mom and I had booked a trip to Scandinavia. We had to cancel it. Oh, well. I'm more worried about everyone staying safe!

I agree with you on the vacation thing. I'm grateful just to still have a job that I can have a vacation from! If not being able to go to whereever is the worse thing COVID has done to you, you're doing ok.

Succulents being easy to care for is one of the biggest lies EVER. I've had some success, but it's taken a lot of trial and error (AND research!). Most succulents need A LOT of sun, which is the downfall for most of us growers (makes sense, they are mostly desert plants). And while they don't like their roots drowned (good drainage is important), a lot of the squish-leaved ones (like aloe, haworthia, echeveria) still need regular watering, because they store all that water in the leaves for the lean times.
For me, the easiest one has been the Snake Plant, though I've had some success with a few others as long as I make sure they get a south-facing window (I only have a couple of those, so there's not a lot of room for too many)

I agree about the succulents, which are the trendy plant. I used to kill jade plants and aloes with alarming efficiency back in the day. Actually, all houseplants perished under my care with terrific regularity, with African violets being my specialty.

Lesson learned, I have no houseplants anymore.

I was with an energy vampire this morning. They DO exist.

Well, I smiled when you mentioned succulents because I could not keep them growing either! Now I have fake ones in the pots and most people cannot tell the difference! Much better!

I kill succulents ALL the time. But I sure enjoy them while they're living!
XO

I kill every plant with immense love through water, I cannot control myself! The only plants that are surviving in my house are: philodendron, shamrock, and Christmas cactus. I think they tolerate my love. I cannot keep a an orchid for the life of me, they die in a week. Probably from love and lack of sun...