So Much For Holiday Zen

About a week ago, Pip was sitting on my lap, and we were discussing all of the holiday preparations we had to do. At one point, I looked directly at him, and this is what I saw: 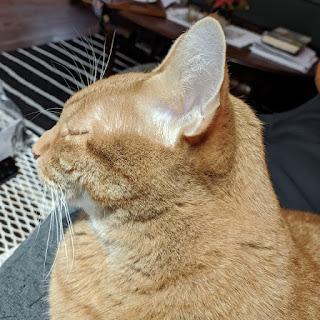 And I thought, Yes Pip, let's try to let this Christmastime be one where we have a chance to relax - or in his case, enjoy some zen moments.
I had been doing pretty well with that, and then Blogger decided that it was not on board with such a decision. If you comment on a post, and I have your e-mail address, you may have noticed that sometimes, you get a response from me to several of your comments at once. That's because a lot of times, I'll wait until I have a block of time to respond, so that I can actually take my time. So I'd been doing that, and thinking that it was all working.
Until last week, when a LOT of the responses I'd sent came back as "Undeliverable." So I went to Blogger and decided to see if I could respond *in* the comments (which I generally avoid doing, since frankly I never look at anyone else's blog comments to see if they have responded to me). And I got the error message "You do not have the proper permissions to comment on this platform." Huh?
So I could write the post, read the post, but not comment myself or respond to comments. I contacted Blogger Help, and to their credit (I guess) someone named Jim wrote back and said that "Blogger was currently experiencing some issues with permissions, images, and comments. Please be patient, we expect this to be resolved early in December."
So if you have commented recently, and I usually do respond to you, please know I'm not ignoring you. And granted, this is not interfering with my holiday "zen" in the sense that it's related to the holidays, it's just something that is annoying and happens to be taking place during this time.
Hopefully this week, things will be resolved, and I can go back to my attempts to Be Like Pip. 😉
We'll see.
Posted by Bridget at 8:25 AM 7 comments:
Labels: blog, Christmastime, Pip 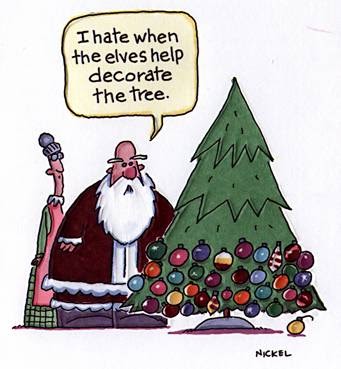 Have a good weekend, and if you are getting ready to decorate for the holidays, have fun!
Posted by Bridget at 7:54 AM 5 comments:
Labels: festive-Friday, Friday-funnies

OK everyone, if there's anything that you SWORE you would do in 2022, and you haven't done it yet, I would suggest you get moving, because there are now only 30 days left!
Happy December!
I had decided a while back that I would not get a yarny advent calendar this year, because a) I didn't need one, and b) it was an expense that wasn't necessary.
But. Early in April, while scrolling through Instagram, I saw a post from Southern Skeins, announcing that the theme for their Advent calendar this year was ... the Rankin-Bass production of "Rudolph the Red-Nosed Reindeer."
Reader, I caved.
Now, I had never heard of Southern Skeins, which of course means nothing to the mysterious and mighty Instagram algorithm, but after checking our their website, etc., I decided that it was legit. And so I pulled out Ye Olde Credit Karde and made the purchase. I was pretty excited about it.
Then of course, months passed and I forgot all about it. Until last Saturday, when I big cushy package arrived for me in the mail. And when I opened it up, I was extra excited because not only are there the skeins of yarn, but the fabric holder is the designs from the show, and means that every year I can use the holder for Christmas-y things! This was the best part of the package to me, to be honest. 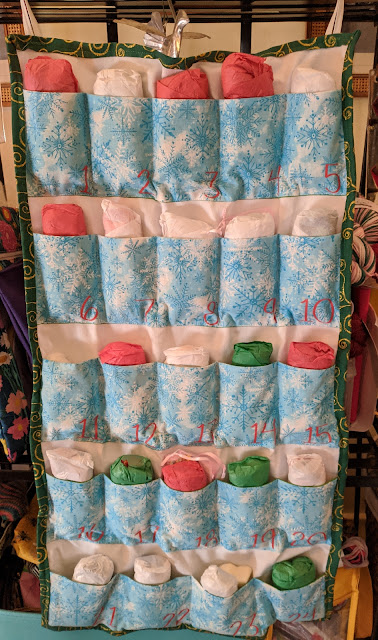 So I hung it up on the baker's rack that holds my project bags, works in progress, etc., and just looking at it pleases me.
Then today, it occurred to me that - guess what, I could open the first little package! The card that came along with the calendar told me that today's color is "Rudolph." 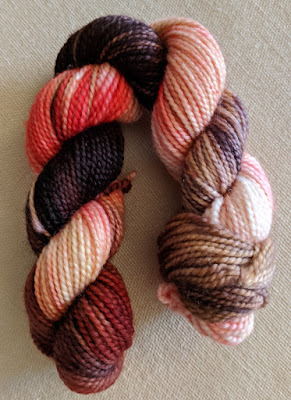 Isn't it perfect? I haven't quite decided what my project for these skeins will be, but so far this yarny Advent calendar has been a win. And the best part is that I'd been having a crappy day today, so remembering I could open one of the packages changed it all. 😊
So I hope that even if your day didn't start well, something happened to make it better for you as well.
Posted by Bridget at 1:37 PM 4 comments:
Labels: December, Rudolph, yarny-Advent-calendar

OK, well, time is weird to start with - I mean, today is the very last day of November, which I knew intellectually, but still found surprising when I thought about it.

But specifically, it struck me on Thanksgiving. I was remembering my dad, not only because he was a crazy holiday person (I've apparently inherited that gene), but because the date of Thanksgiving this year - November 24 - fell on the anniversary of his death. The year he died, it was the Monday of Thanksgiving week, so it's always around that holiday, but there have only been a few times it falls on the same day.
Then I was thinking about how he was only 53 years old when he died. And how, from my perspective now, that's so young. (As a kid of course, I always thought my parents were REALLY old.) I was gifted with 13 of those years, and though I would have loved more, I'm glad I was given at least that much of a sliver of his existence on earth.
But what really put me on the "Time Is Weird" train was when I realized that he has been dead for 53 years. So he has been dead for as long as he was alive, and I have to be honest, that kind of blew my mind.
But then you know what was really nice? I was pointing this out to The Tim, who agreed with me that yes, it was a weird thing to think about. But then he said to me "But he is well served by your memories of him."
I think that is one of the nicest things he's ever said to me.
Posted by Bridget at 8:38 AM 6 comments:
Labels: family, my-dad, Thanksgiving

A Different Kind of Thanksgiving

Hello all, and if you celebrated Thanksgiving last Thursday, I hope you had a good day and a wonderful meal. And if you traveled, I hope it was as uneventful as possible, though I realize that is asking a lot these days.
Our Thanksgiving was a little bit different this year. On Wednesday, The Tim found out that he would have to work the 7-3 shift on Thursday. Since he is lower on the seniority list, he had no choice. So it was disappointing, but it's not like he could do anything about it.
We usually spend the day lazing together, watching the parade, the Dog Show, some movies or whatever, and snacking on treats. There's usually a walk involved (unless it's pouring rain or worse) and we work on the meal together. But I was on my own with the kitties for most of the day, and it was fine, but lonely and not nearly as much fun. I managed to get most of the dinner ready, and he had time to make the yummy gravy he makes once he got home. We had a good meal and a nice evening, but I don't think it was the best day for either one of us. He said things were extremely slow at work, so it's not even like the day moved by quickly. We survived, obviously, but I hope that doesn't happen again anytime soon. 😊
The Tim was at work again on Friday, and I had a dr appt, so not much happened otherwise. Saturday we both had some extra energy and spent time working on some projects around the house. He made pizza for dinner, which was a wonderful treat, since Pizza a la The Tim is amazing!
Yesterday was one of my work days. And boy, was it busy! One person who visited the shop bought over $700 of yarn - she said she was knitting *all* of her gifts, so I guess that added up quickly. The day sped by, since there was seriously not a single minute when we were not doing something for/with customers. (Though I would rather have days like that, than the kind like The Tim had on Thursday.)
I do have some wisdom to pass along though: I would suggest that, if you decide you would like to knit a sweater, and want the yarn store staff to a) suggest a pattern, and b) suggest the yarn to use, that you not decide to show up at the start of the busiest time of year. Two separate individuals showed up yesterday, wanting us to help  them find a sweater pattern and yarn to knit a sweater. And I mean, they had only vague ideas of what they wanted - "Something dressy," or "Easy but with texture." Even when it's not the holiday season, that takes a lot of our time to help you, even if you are an easy person to help. But when it's holiday time, and there are tons of people in the shop, ready to either check out, or with seriously quick questions, it's a problem. So maybe either do some homework on your own, or wait until January, OK?
This week should be busy, and I have three - count 'em, three! - dr appts at the end of the week. Well, one is a dentist appt, but that still counts as a dr appt to me. I'm just hoping to get them done with hopefully a minimum of drama.
In some happy and exciting news, my Christmas cactus is ready for the holidays! 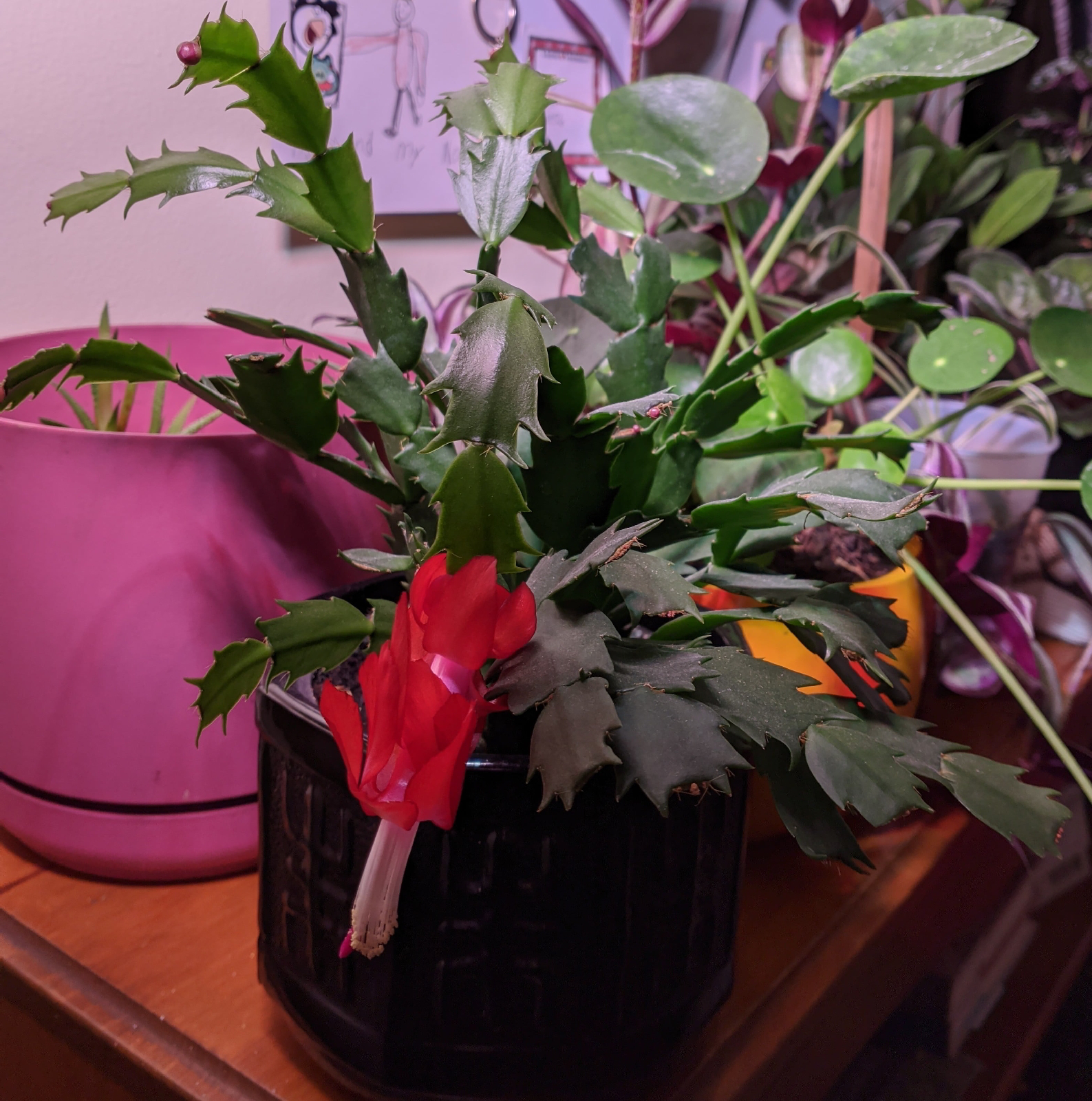 I've had this plant for about three years, and though it was blooming when I bought it, since then I've never even seen it thinking about blooming again. But now it has this beautiful flower, and about four other buds ready to show up! I'm so excited, but of course could not tell you what I did/did not do that resulted in blooms ...
Let's hope that the coming week will show up with some good surprises like that for all of us. Have a good one!
Posted by Bridget at 8:20 AM 6 comments:
Labels: holidays, plants, Thanksgiving, The-Tim, weekends
Older Posts Home
Subscribe to: Posts (Atom)