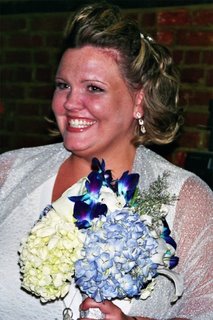 Here is a picture of Niece E on her wedding day, last Friday, August 25. Doesn't she look beautiful?

And here she is with her new husband, and their baby, who was born last February. I love this picture, don't they look happy?! 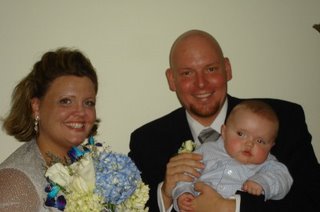 It's not that easy to see in the photos, but she was wearing a beautiful lacy pale gray wrap around her shoulders. It was really delicate, and perfect for a summer wedding. I'm not sure where she bought it, but it was disappointing at the end of the day, when she realized that the left side was split lengthwise, right up the middle! None of us could figure out when or how it happened, but I told her to check a few different types of places (including yarn stores) to see if there was someone who might be able to repair it.

Tonight I get started on The Great Swatch for my husband Tim's birthday present, which shall remain nameless at least for now, until I can get an idea if he ever looks at the blog unless I specifically mention something to him. It's been a long time since I've knitted anything that really needed a gauge swatch, but I really want this, er, "item" to be as close to a perfect fit as possible. Any kind thoughts in my direction are most appreciated. :-)
Posted by Bridget at 7:25 PM 2 comments:

We spent most of this weekend in Baltimore. Niece E got married on Friday, and her sister's (Niece A) wedding shower was on Saturday, so it was a twofer. The bride looked incredibly beautiful, and as soon as I get our photos developed (no, I don't have a digital camera), I'll post one or two. We had a great time, and ate, drank, and were overall very merry for the bulk of the visit.

And, believe it or not, although no knitting took place, there was an aspect of it that was knit-related! In the midst of all this, I found out that the Baltimore Convention Center, where Stitches East is going to be held this year, is within walking distance of one of Niece A's house! (This is the 1. Hurray! part of the post.) I may actually get there for once, since I will have a clue how to get to where it is. Which is most excellent news, n'est-ce pas?

As if that was not making my life exciting enough, I managed to find one of the photos of one of my knitting projects. Ladies and gentlemen, I give you The Cupcake Hat (this is the 2. Finally! part of the post): 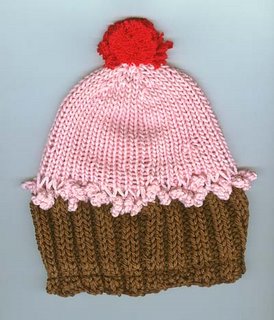 I made this for GreatNiece N, who just turned a year old. She has three older siblings, and they all got a knitted hat when they were born, but I had a hard time figuring out what to make for her. I am embarrassed to say, though I feel I should get points for being honest, that I finally made my decision, figured out how the h*** to do the stitches for the little bobbly things, and got the hat knitted and sent one month before her first birthday ...

Anyway, once I sat down and fiddled with the pattern instructions, I finally had an Aha! moment and could figure out the aforementioned little bobbly things. Once I figured that out, I was able to more or less just breeze along. My sister said that sweet little N looked really cute in the hat, and if I ever get a picture, I'll post it so you can see the finished product worn by the recipient. :-)

OK, time to pay some bills and watch a little bit of the Emmys. Then tomorrow it's back to work ... which I must say, really cuts into my day, you know???
Posted by Bridget at 7:28 PM 1 comment: 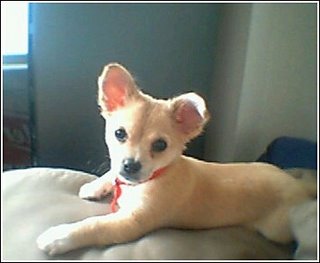 To quote a friend, le sigh. I created this blog partially so that I could post photos of projects I have completed, and as time goes on, will be knitting. But I failed to remember one minor detail - we have a new computer, and it does not have a floppy disk drive. Meaning that the photos I had that were already in digital form, are currently inaccessible!

I am hoping to resolve this problem before too long. In the meantime, you'll just have to read along, and use your imagination - you know, sorta like listening to your favorite shows on the radio before TV was invented.**

Thanks for reading along, and thanks Carol, for being the first one to comment. I'll have to think of some appropriate way of marking the occasion ...

It's not knitting, but here's a picture of Niece J's dog, Biggie. He's pretty cute, don't you think?

Tess - aka Tessie Lumpkin or The Bunyip - is celebrating her 15th birthday today. Well, at least we think she is 15. She was a stray who showed up in our garden, and no one in the neighborhood seemed to be looking for her, so she became one of us. In her earlier life (lives?) she must have not been treated very well, because she had some front teeth that were sheared at an angle, and she was pretty mean, especially to the other cats, for a long time after we adopted her. But age has mellowed her to some degree, though not completely, and she knows that we aren't going to hurt her, so I think she is pretty happy these days. One of these days, I'll find a picture of her and post it so you can see what a pretty girl she is.

OK, this has nothing to do with knitting. But anyway.

When we first took Tess to the vet, she was thought to be about a year old. We have always celebrated our pets' birthdays (something that my family did while I was growing up too, so the craziness is inherited), and when we have a good idea when they were born, will actually celebrate the day they were born. But with strays, who knows? So we "assign" birthdays. Tess' day is extra special, because she has the same birthday as my father and my father-in-law.

My father would be 90 today, if he was still alive. He died when I was 13 years old, so he has the advantage of remaining the same dad he was as long as I knew him. Which is to say, we didn't have any time to develop a crummy relationship based on me wanting to wear makeup, or date boys, or pierce various body parts. Though it sounds strange to say so, I had the chance to realize from a very early age that no one lives forever, and that you need to appreciate people - especially your parents - when you can, so there are no regrets later. So happy birthday, Dad. You were the best and always will be.

My father-in-law would be 84 today. Unfortunately he died in 1989, so he's not here to celebrate either. I knew him for about ten years or so before he died, and he has the advantage of being someone who only knew me as an adult, and I have the advantage of knowing him once all of his kids had been raised, schooled, etc., and he was enjoying his retirement. He was the King of the Pun, and one of the truly gentlest people I have ever met in the universe. He was one of those people who could fix and/or build things, which was an amazing quality to me (as my father could change a light bulb and that was about it). I remember one year for Christmas, he MADE a lap desk for me! I still use it on a regular basis, and once my sisters-in-law saw it, he had to make them each one too. My husband is like his father in all of the good ways, so my father-in-law has the advantage of being someone who I remember as giving me a special gift. Happy Birthday, Dad. Thanks for making me smile then and now.

So back to Tess. Why shouldn't she have her birthday today? For someone who seems to have had a rough start, she deserves a birthday that is a special day anyway. And even though lots of people seem to think that it's rude/weird/sick to give your cat a birthday that belonged to a parent/in-law, I think each dad would be amused in his own way. So Happy Birthday, Tess! We hope you'll have many more with us.
Posted by Bridget at 7:27 PM 1 comment: 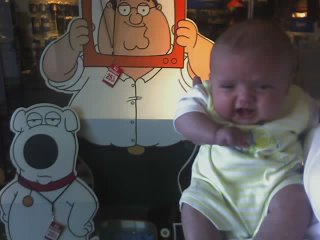 Hello and welcome to The Ravell'd Sleave (with apologies to Mr. William Shakespeare)! First let me say that I am for the most part, philosophically opposed to blogs ... Having said that, after participating in a couple of knitting-related swaps, joining Knit the Classics, and reading some others' knitting blogs, I decided that a knitting blog would be OK, since I could post pictures of projects (like every three years or so when I finish something), and that having a knitting blog would make participating in swaps logistically simpler.

So- here I am! Let's see, what can I tell you from the get-go. Well, I have been knitting for about 10 years, and though I'm a slow knitter, I'm not as slow as I used to be. I am usually working on socks, or baby hats, or other small items that I actually have the chance to finish before the recipient is two small for whatever I've knit. I am currently working on a project that I can't mention here, at least not today, since it is supposed to be a surprise for my DH, and I am going to tell him to take a look at the first post.

Anyway, besides myself and DH, our immediate family consists of our cats: Tess, Abigail, Garden Kitty, and Jetsam, who just had his Big Operation the other day. DH is a member of Big Brothers/Big Sisters, so we also have 12-year old Sebastian in the mix. And then there is Doughboy, the dog next door who we take care of when his owners are away. You are likely to hear about everyone if you become a regular visitor.

I am lucky because my family is very supportive of my knitting and craft endeavors, so I don't worry about my accumulated "stuff" being discovered!

I have other interests, but since this is just supposed to be a short intro, I'll save those golden nuggets for another time. I'm sure you are chomping at the bit to learn more, huh?

Anyway, thanks for taking the time to visit.
Posted by Bridget at 3:57 PM 2 comments:
Newer Posts Home
Subscribe to: Posts (Atom)