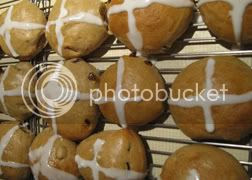 Hot Cross Buns!
After my knitting problems caused by being hepped up on painkillers last Tuesday, I decided that I would still try to bake hot cross buns, since the next day was Ash Wednesday. For several years, I've made them the weekend before Ash Wednesday, and though it's a bit of a project, I look forward to it. So I put my knitting away and headed to the kitchen. Happily, my baking went better than my knitting that day. And though I thought this year's batch turned out to be flatter-looking than others, Tim decreed them "the best batch ever." Which makes me wonder if I should do more baking when in a drug-induced state ...
I also received my package from Kim, my swap pal in the Favorite Color Swap 2. Talk about a box of goodies! I will post pictures of my haul in the next day or so, but I'm telling you, Kim really spoiled me. (And has made me think that my package to my pal will be, um, underwhelming ...) She really went above and beyond, sending me so many more wonderful things than I would have ever expected to receive - and all when she was probably busy making preparations for Alan Rickman's birthday this past Wednesday (you'll have to see her post for that day to really appreciate this)! Some of you may remember this past December, when I took part in the holiday ornament swap with the Knit the Classics group, and Kim was my swap partner - as well as one other time! I will repeat what I said then, it's fine with me if Kim keeps getting me as her swap pal! (Though I'm willing to bet that she wouldn't mind getting someone else's name for a change ...)
Posted by Bridget at 4:11 PM

Catching up on my blog reading and so sorry to learn about your stitches. Hope you are feeling better. Your hot cross buns look fabulous! Looking forward to a picture of your Odessa progress. What's a little cat hair? Don't all knitters own a cat or two?

Glad you are ok!

Those hot cross buns look so delicious - too bad I don't bake (and too bad you don't do mail order...)

Well girl, thanks for showing your buns! They look delicious! Hope you're feeling better.