Thank you all so much for your good wishes for Easter.  Ours was an especially nice one this year, helped along by the kind of weather that would let you wear your new Easter outfit without having to put on your winter coat.  (Not that I had a new Easter outfit.  Or even an old one, for that matter.)

Due to popular demand, I'm sharing with you some of our Inappropriate Easter eggs.  But before we start, a few things need to be said.

1.  I am a lousy photographer, with a dinky digital camera.  These pictures are as good as it was gonna get.
2.  I did take additional pictures, but no amount of Photoshop settings could render them visible.
3.  We do make regular Easter eggs, with our names and pictures of things we like on them, but we do these additional eggs to amuse ourselves.  (Because to paraphrase one of The Tim's sisters, no one thinks we're as funny as we do.)
4.  If you are easily offended, just don't read/look any further.  You've been warned, and I don't feel like dealing with comments from those who are morally outraged.
5.  We are equal opportunity offenders - from the famous to the family, and even ourselves.

OK, so here you can see what things looked like on Easter morning, after the Easter Bunny had stopped by and apparently decided we had all been good:

The large basket is mine and The Tim's, the smaller baskets belong to our kitties, the large bags to my niece and her husband, and the small bags to their kitties.  Lots of yumminess there!
But of course, before you get to this part, you have to get the Easter eggs ready.  I give you a group shot of the Inappropriate Eggs of Easter 2010. 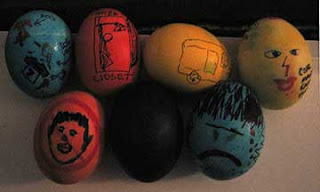 Let's review, starting with the top row, left to right.
1.  Egg with a dog drawn in upper left-hand corner, and an arrow with "Dog" pointing to it; in lower right hand corner, a Philadelphia Eagles jersey, which is #7, "Vick" along with a severed head and hand, with an arrow pointing to it saying "Dog vomit."
2.  The David Carradine Death Egg.
3.  Rusty the $400 van.  My niece's husband paid $400 for a van he saw in someone's yard up on cinderblocks a couple of years ago.  The Tim promptly christened said van "Rusty," since it needed a lot of work before it was drivable (ya think?).  Well, to everyone's excitement, Rusty came to Philadelphia for Easter.  Only to have us find out it was actually Rusty 2.0 - the original had to be scrapped and this was a replacement.  As my mother would say, it's a terrible case of false misrepresentation.
4.  Combined Celeb Death Egg.  The side showing is Brittany Murphy, with the quote "Coke makes eating disorders fun!"; the other side is Farrah Fawcett, "Cancer makes good TV"'; one end is Michael Jackson, "Move over, Jesus," and then a radio speaker on the other end, "Hello Angels" in memory of John Forsythe.  (Too late we realized that Corey Haim had been omitted.)
5.  (Supposed to be) Robert Pattinson in "Twilight."
6.  The Pope, lamenting that priests messing with altar boys are ruining his Easter.  The amusing part is that the egg was in the dye longer than anyone realized, and so the design didn't really show - a true Cover-Up!
7.  A victim of the Haitian earthquake, with a number to text on the other side of the egg to donate money.
Random close-ups: 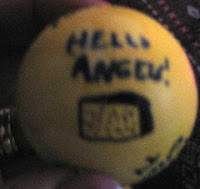 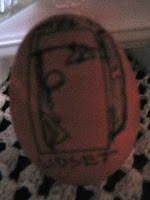 Just remember - you asked for it.
Posted by Bridget at 8:04 PM

The David Carradine egg. Oh my.

Too funny! They are all great. What a fun thing to do.

I give your eggs three snorts! Inappropriate indeed!

The more inappropriate the better!

I'm drawn to the David Carradine egg. But don't assume anything about me.

Hahaha, yeah. We did ask. :) Those are tremendously inappropriate. Well done.

My favourites are the invisible Pope's egg (definately God is telling you something there!)
and the Haitian Donation Egg.

I've a personal interest in finding that hilarious. Recently someone on Ravelry said they wanted to donations to auction to raise money for Haiti. http://www.ravelry.com/discuss/irish-knitters/1000999/1-25
She got donations about two months ago and nothing has happened and nobody's asking why?!! Hilarious!

That story about the van is hysterical!!! An egregious (handy lawyer word) misrepresentation - LOL

Those are awesome. And for some reason I particularly like the Rusty story :)

The David Carradine made me laugh so hard I choked. Oh, wait - sorry -

I didn't know enough to ask for it, but I'm so glad I got it.