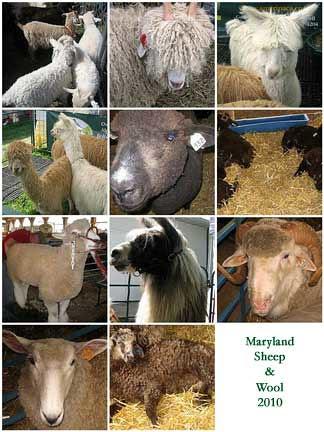 Yep, these are my favorite pictures from the Maryland Sheep & Wool Festival last Saturday.  I took more pictures, but they either didn't turn out (sheep herding dog trials), or I didn't actually end up with a picture of what I thought I was photographing ...

I had wondered how different the experience would be, since this year I was on my own.  I don't mind doing things on my own, but I'd always gone to MDSW with someone else, and we spent the day together walking around.  So it was going to be different, no matter what.

I had a blast!  I just wandered where and when I wanted to, stopping many times for breaks to sit and try to cool off in the shade.  No one cared how long I took, or if I wanted to look at something five more times during the day, or how much anything cost and why I shouldn't buy it - well, you get the picture.  It was incredibly hot and miserable, weather-wise, and I would have gladly traded that, but I got to see, talk to, and pet as many animals as I wanted to, and had a lot of fun people-watching as well.

Of course, I knew a lot of people that were also traveling via the Rosie's bus, but once there I saw Carol, Amiryam, Kathy M., and Laura, and finally had the chance to meet Mindy, which was just the best thing!  We've been "friends" through blogland and Facebook for a while now, but I'd never gotten to meet her in person, so that was a treat.

I didn't buy too much, partly because I didn't have anything in particular in mind that I just HAD to have, except that I wanted to find buttons for my Pickle Cardigan.  I am not that far from finished, and figured if I spent money on buttons, I would finish the sweater for sure.  I also bought a t-shirt for The Tim, a squirrel finger puppet for the cats, a small amount of angora bunny roving, and a drop spindle.  No I don't know now to spin.  But if it's a disaster for me trying to learn, or I can't "get" it, I'll only have bought a teensy bit of roving, and have a very pretty spindle to look at.

(I have not been able to get pictures of said items that are not either blurry, or bleached out by the flash; however, I shall keep trying if nothing else than because now it's personal ...)

This year, it seemed pretty crowded already by the time we arrived, but by around 2 in the afternoon, it seemed like a lot of people had left.  Which was great, because you could really take your time looking at everything, without being crushed by other people, or swept along in the crowd!  I know a lot of people have said in the past few years that it is too crowded, and that Rhinebeck in October is better, and so they have stopped going.  Which is fine, 'cause it's not like anyone is forced to go.  But I have always enjoyed myself, and this year was no exception.  And you know it has to have been fun if I was able to enjoy it in the heat!  I will likely not make it to Rhinebeck any year soon, so I feel lucky to be able to make it to Maryland every now and again.

If you haven't gone, you should go.  The animals alone make it a great day.
Posted by Bridget at 7:38 PM

How I would love to go to something like that! I'm glad you had fun ~ and now we had better see you Pickled soon :)

I go to the local Montpelier festival by myself every other year or so (I think I've only missed one year since I began knitting), but there are SO many people I know there that I usually end up walking around with someone for a while anyway.

It is nice to set your own agenda - which for me means not having one. It's a drawback to needing to be driven to all of the other festivals, but the company can be fun too!

Maryland was totally off my calendar this year. So glad you were there. Love the animal pics.

A squirrel finger puppet for the cats? Sounds like too much fun.

Glad you had a good time.

I've never made it to MDSW, but would love to. Rhinebeck is closer for me. You were very restrained in your purchases, I always end up splurging on some wool that my stash doesn't need.

It sounds so wonderful, I've never been to anything like that! Thanks for sharing the pictures!

I agree that the animals definitely make it a great day! Good luck with the spinning. It's addictive!