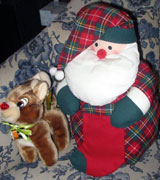 Like most little kids, I was a firm believer in Santa Claus as a child.  Though I had my own take on it - for instance, I never for a minute thought those guys in department stores or Christmas parties were Santa, because a) they didn't look like him, and b) he didn't travel around until Christmas Eve.  Duh!  I also never wanted my picture with Santa, because, well - see above.

Once I started school, some kids believed in Santa and some didn't.  But after first grade, believing in Santa became something you kept to yourself if you didn't want to be teased.  In third grade, I was in what was called a "split class" - third and fourth graders in one classroom.  And I remember that some boy stated one day that Santa did not exist and anyone who thought so was a baby and stupid.  At which time Joanne Manfredi (a fourth grader) stood up and said that she believed in Santa, because he was "the spirit of Christmas."  Well, that stupid boy (because in third grade, all boys were of course, stupid) wasn't sure what to say, and besides Sister said something to the effect that we weren't going to discuss something like that, and that was the last word on that topic.

I guess at some point I realized that my parents bought most of the gifts I'd get for Christmas.  My parents certainly never said Santa didn't exist.  Ever.  I'm sure my sisters, who were older, told me plenty of times, if for no other reason to torture me!  However, this news did not in any way traumatize me, upset me, anger me, or any of the other things that others say happened when they found out that Santa wasn't real.  And even as a little kid, I was still very cynical (especially for someone my age).  As far as I was concerned, even if he didn't bring all of the presents, that did not mean he didn't really exist.  Having said that, because I was already considered a weirdo by other kids, I generally kept my mouth shut on the whole Santa issue.

Fast forward fifty-odd years, and I'm at a party with other people who begin to discuss the topic of Santa Claus.  The usual stories of heartbreak and/or anger when it was discovered that Santa was real, people had been lied to by their parents, etc. - I'm sure you've all been there.  Then everyone starts to talk about how wrong it is to tell children lies like that, blah, blah, blah.

I mentioned that I still believed in Santa Claus, but was pretty much blown off and ignored.  Which is fine (and not a new experience to me).  But the whole thing really bothered me, and I've finally figured out why.

Because I really *do* still believe in Santa Claus.  He does come to our house on Christmas Eve, and on occasion leaves a present.  But Santa is there.  He is around even if you can't see him or prove his existence.  He makes Christmas fun, and he is awesome.  If he doesn't bring you what was on your Christmas wish list, that doesn't mean he isn't real, either; at least in our house, you never got a lot of the specific things you requested (probably due to price), but there were always surprises, and you always got something.

I love Christmastime.  The songs, the gifts, Santa, reindeer, elves, ribbons, cookies, decorations - all of it.  It reminds me every year that no matter what else has happened, it's here and it's a special time.  And every year, my belief in Santa Claus gets stronger and stronger.

I am fully aware that Christmastime celebrates the birth of Jesus.  I do not believe it should be about nothing but RECEIVING, or comparing how much was spent on your gifts, or even having the best Christmas party.

But even during the saddest or hardest years of my life, Santa has been there at Christmas, reminding me that it's not all about me, or things, or money.  Reminding me that it's a time to reflect, but also enjoy.  And that whether or not I've remembered to be nice to people in the course of the year, that I have another fresh start given to me.

And that is why I still believe in Santa Claus.
Posted by Bridget at 7:28 PM
Labels: Christmastime, Santa-Claus

As a child, I got to the age where you started to wonder about that sort of thing. Well, I figured if the tooth fairy was real, so was Santa, makes sense right? So one night I lost a tooth, didn't tell my parents and in the morning it was just a tooth, illusions all shattered.

I didn't tell my mother for months.

I'm catching up on reading from long ago. I was never much of a believer since our Christmas presents were opened on Christmas Eve--as good Scandanavians are wont to do. But my kids were believers. Santa never brought the big stuff, since they were discouraged from being greedy, but he always filled the stockings.