The Twelfth Day of Christmas

Well, here we are on the twelfth and last day of Christmas.  Always a little bit sad for me, as it is my most favorite time of the year.  But then again, I always have to remind myself that if Christmastime was all of the time, it wouldn't be any big deal.

At least now, we have something special to celebrate on January 6, which makes the end of Christmastime a little bit easier to take.  Because exactly one year ago today, Dug the Doodle Dog officially became a member of our family! 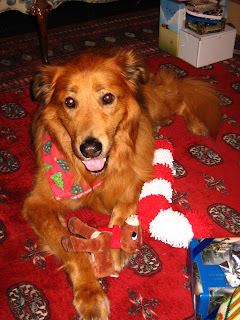 He has been a wonderful addition!  When we adopted him, the vet said he was probably four years old, so we are saying this is his fifth birthday.  After dinner, we'll have some presents and treats, and give him extra hugs and kisses.  Now it seems hard to think about a time when he wasn't here.

Everyone says that he is so lucky to have been rescued, and that is true.   But I think we all know who was luckiest in this whole situation.  :-)

Happy Birthday Dug, I think they give to us far more than we could ever give to them. Give his cute face a birthday kiss from me.
Meredith

Happy Birthday, Dug! And many more.