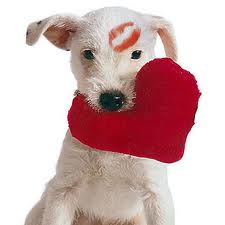 Today is another holiday that people just seem to have to whine about.  Not me, I'm a big fan of Valentine's Day.  Maybe because I grew up thinking it was a fun day to give someone a card or little gift, and have some chocolate, rather than thinking that because "they" say it's about having someone to be romantically, hopelessly, in love with, if you were not in a true relationship, there was something wrong with you.  Some of the best Valentine's Day cards and gifts I ever got were from my parents, so there you go.

So, I hope you have a lovely day.  Even if you don't do anything extra special, each of us has been loved and/or has loved, and to me that's worth celebrating.

Another fun thing in our house is that today is also Jetsam's birthday (7th) and Pip's birthday (2nd).  In truth, we don't know the date either was actually born, but based on what the vet told us at the time they were both adopted, they were likely born in February, so we chose the 14th.  (This was also the day we used to celebrate the Garden Kitty's birthday, for the same reason.)  And so, as usual, we will have cake to celebrate (The Tim was off today, so he baked a chocolate cake), and the kitties and Dug will all get some treats, and the two birthday boys will get a present each.  They are such good kitties, they deserve everything and anything. 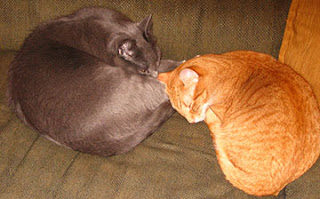 Jetsam and Pip napping together

They are very sweet together, and have become good friends.  Both of them are heat-seeking creatures, so they tend to spend a lot of time curled up together (as in this photo) during the winter.  I don't know that they will ever be the pals that Jetsam and Garden Kitty were, but I know that Jetsam was very happy when Pip joined the family, and he was no longer an only kitty.  And Pip thinks Jetsam is really cool.  :-)

So I hope today will find you feeling happy and finding a reason to smile, even if just for a few minutes.
Posted by Bridget at 5:05 AM
Labels: birthdays, cats, February, GK, holidays, Jetsam, Pip, Valentine's-Day

Happy Valentine's Day! I hope the day is filled with love of all kinds!

May you find some "love-ly" surprises today.

Have a wonderful day,
Meredith

i'm so happy to see them love each other so much.

happy valentine's day b! love to you and the tim!