On To the Next Thing, Whatever That Might Be

Tomorrow I return to work from my medical leave.  To say I am not looking forward to doing so would be an understatement.  However, it is what it is and I know that I am incredibly lucky to have a job in the first place, and to be well enough to return to said job.  Plus, it will be really good to start getting paid again, since I have not been paid during my medical leave.  In the end, having money to afford to live and pay bills does make a big difference, you know?  ;-)

I am a little disappointed that I had to give up my standing desk, per my dr's instructions.  He said that in a year or so I could go back to it, but by then who knows what will be going on at my workplace, or if I'll even still be there - things are "changing" all the time.  Granted, I would be miserable with a standing desk at least for a while, but the good thing about it was that it made me move around more, and believe it or not, I slept better at night!  Again though, see first paragraph - I'll live ...

In the meantime, I've been trying to get some things done that are low-energy but decent results around the house while I've been home.  I finally got around to sorting through towels and sheets to keep those usable, and organize the linen closet.  That was something I've wanted to do for a long time, and I could do it sitting down.  The end result was a much cleaner-looking and better organized linen closet, and some towels to donate to our local vet and one of the local animal shelters.  Win-win.

I also asked The Tim to get out my sewing machine (it is stowed in the sewing table, but is too heavy for me to currently lift), because there were a few things I wanted to do.  I experimented with making some kitchen tie-towels out of some of our extra kitchen towels.  These days, I don't see them anywhere to buy, and we use ours ALL the time.  I had a teeny bit of success, but have in mind what I want to try next so that (theoretically at least) the results will look more like this: 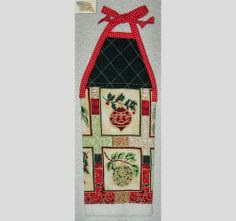 The two that I completed are usable, but I don't expect them to last long due to some things I failed to take into consideration.  Still, I'm on  my way.

The item I am most pleased with was something that I had been thinking of trying for a while.  I have had a Nook Simple Touch for a couple of years, and always have used the bubble wrap sleeve that came in the packaging with it to carry it around. 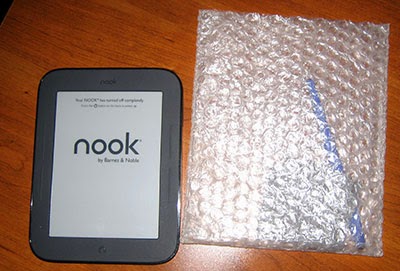 I was always intending to knit a cover for it, like I did for my Nook Tablet, but never ever got around to doing that.  But then I had an idea to sew a pouch for it, that would hold he bubble wrap container as well, so it would still be cushioned.  So I poked around in my fabric stash, and found something I thought would be perfect for it.  Some measuring and sewing, et voila! 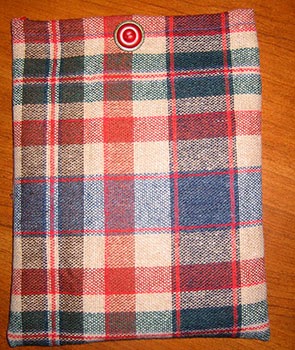 I put velcro strips on the inside top seam, to keep it closed, but found this button and thought it gave the whole thing just a little more zip.  I am really happy with the result, though I know that the Sewing Gods and Goddesses were appalled that I didn't press the fabric at any point during the process.  But I was on the third floor, and the iron and ironing board were in the basement, so it just wasn't gonna happen.  And since it was neither an article of clothing nor a gift, I was fine with skipping that step - it's not like it's gonna stay crisp and fresh-looking once I start schlepping it around in my bag anyway!

The sewing machine is now put away, since I knew that I wouldn't get back to it for at least a few weeks, since I'm sure that heading back to work will wear me out.  Since space is not overwhelming in our house, it's better to put the machine away until I use it again.

So the last few days of my time at home have been busy but in a good and relaxing way.  Now it's back to the usual, but different, routine and figuring out the cans and cannots of that.

Have a good week, everyone!
Posted by Bridget at 8:00 AM
Labels: for-me, my-design, projects, recovery, sewing

Sending good wishes your way that the transition back to work will be smooth and will not be too exhausting.

Look at you healing and organizing and sewing!!!! Love what you have made, the pouch containing the bubble wrap is brilliant. Good luck at work, you are going to be very tired this week, so work and only work for you nothing else crazy, okay?
Hugs,
Meredith

Congrats on getting back to work. Its a big achievement if a knackering one but being able to pay the bills helps you sleep! Sending you lots of healing good thoughts.
Ps. if you get tired sleep as much as you can it will pay dividends in keeping you going.

I love the case you made for your Nook! You did a great job.

Good luck with your days back at work. Hope you continue to feel better every day.

Steve and I are considering coming back to Philadelphia when he retires in a couple of years. I've never lived IN the city and we are thinking seriously about it. There are some things that have to fall into place, but I sure would LIKE to give it a try.

Have a good time back at work! Hopefully you aren't overwhelmed by things that you missed. That's what would happen to me :(

Bridget- I think your nook cover is really nice.

I hope work is good to you. You deserve lots of good. I knit my kindle a cozy and I love it, but I also worry about it snagging. I like your fabric one, a lot.

Hope your transition back to work is going well! It seems you're really making the best of things - and discovering new outlets for your creative energy. Wishing you continued healing!

I didn't realize you'd written a couple of post-hospitalization pieces until I logged in on a whim today. I have MISSED YOUR BLOG! I agree with others who've praised your Nook case and your baby sweater. And I especially agree with those who have warned you to get lots of sleep during these first few weeks of being back at work. You have no idea how much good it does me to read The Ravell'd Sleave. And remember what sleep does for ravell'd things. I'm counting on you.

Aw, thinking of you as you re enter the work force. As we always say, "Re entry's a bitch"

I love your cover!~!!!
Be nice to you. Getting back to work is tough
i had to do so after a hysterectomy with complications and after depression> Both times very difficult. But , It can be done… and take all the hugs you can get