A Bag of Goodness

About a month or so ago, via Instagram, I saw that someone I followed had reposted a photo of a pair of socks one of her acquaintances was designing.  They were, as the expression goes, right in my wheelhouse. 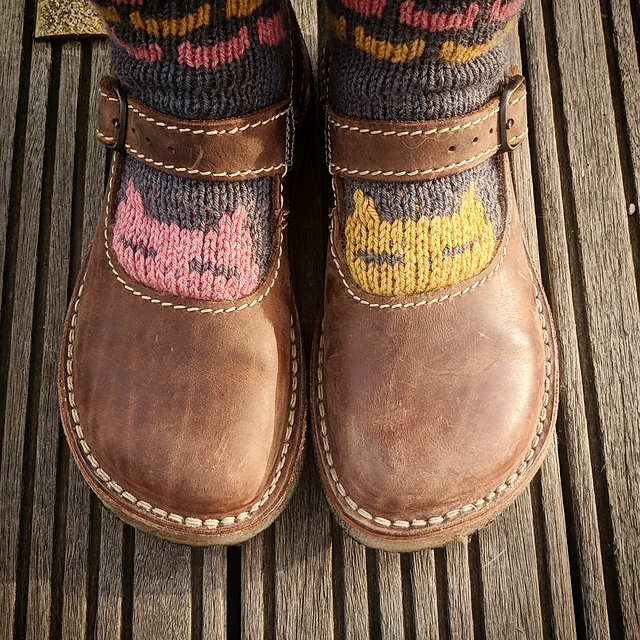 What could I do, but start following the person myself, and keeping track of her designing, so that I would know when the pattern was released?  It turns out that she is an interesting person to begin with, in that she lives on a boat (!) with a boyfriend, a dog, and a couple of cats.  She also designs all kinds of cool and interesting things for knitters - like stitchmarkers, shawl pins, etc.

She then announced that she would be releasing the pattern at Woolinn, and had created kits to sell there, as well as on her website.  I decided that I not only needed the pattern, but I needed the kit, since I couldn't go to Woolin, or any other fiber festivals this year.  So I ordered one, and it arrived a couple of weeks ago.  I wanted to open it right away, but told myself that could only open it AFTER I was well into the second sock of a pair I was knitting.  I knew that if I opened the package, the already underway pair would be completely abandoned, and I was determined to finish those!

So this past weekend, when I was well through the leg of the other sock, I opened the package.  Though as you can see, the package itself was pretty darn exciting. 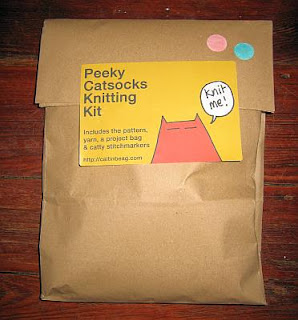 The inside was even better! 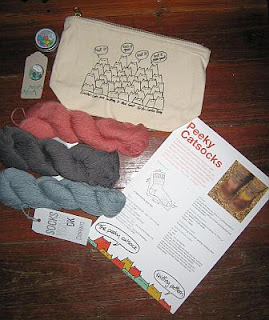 There was the pattern and yarn to knit it, a Sinister Cat project bag, a tin of cat stitchmarkers, and a pin with Sinister Cats that says, "Smash the patriarchy."  I just love it all, and can't wait to start the socks, because I think they will be a fun knit.  This truly qualifies as one of the best kits I've ever received.

Opening this package was a really wonderful way to start my vacation week.  And now I have even more motivation to finish the pair of socks I'm currently knitting - the peeky cats await!
Posted by Bridget at 9:21 AM
Labels: cats, knitting, projects

It's almost like she designed those socks for you! That is going to be one fun knitting project.

So cute! I now really want that whole kit!

Oh! Those look so cool! I'll be excited to watch your progress.

Too, too fun! The yarn is really pretty and I LOVE the Sinister Cat project bag and the button! Great package to receive Bridget. Happy Vacation!

OMG! I think I need those!

Oh, my! Those are cute socks!! I can't wait to see them finished!

Blast! I had sworn I was NOT buying more yarn this year.

You are an Evil Temptress.

I must have this kit. However I followed your link and did not find any peeky cat socks or any kit. HELP!!

Oh, my heart!!!! That is one spectacular kit!

Too fun! I love the whole Kit-n-Caboodle.

what a nice surprise in a knitting kit!! Can't wait to see your socks all knit up and meowing :)

❤️ the pattern and the kit wrapping and contents are adorable. Have fun!

I saw that kit on instagram??? I LOVE it. and I have to say I love those shoes!!