At 5:30 p.m. this evening, it will be 40 years to the minute that The Tim and I have been married.  That's a really long time, no matter how you look at it.

Months ago, we discussed possible ways we could celebrate such a milestone.  As it turns out,  it's good we didn't make anything final, as we don't actually have any money to work with, and I'm not my usual barrel of fun lately anyway.

But I've been thinking about it all nonetheless.  Forty years ago, at our wedding, it was only the second wedding performed by the Jesuit priest who married us.  I think he was more nervous than we were!

My mom and godmother were there, as well as both of The Tim's parents and godparents, as well as our siblings, and their families.

Back then, getting married in October was unusual - now it's the second most popular month for weddings.

We took our wedding gift money a week later and got our first pet - an orange canary that we named Hop Sing (we weren't allowed other pets in the apartment where we lived).  He was a sweetheart, and loved to sing along with violins in classical music on the radio.

We have always said we would never get divorced.  Not because we are so perfect, but because both of us are too stubborn to admit it isn't working.  I think that is still the case!

40 years is a long time.  The future is still out there, just not as long a road.  For the most part, we are still in good health (wrist cast notwithstanding), but it doesn't seem like the guarantee it was in 1978.  I'm pretty sure that neither of us has accomplished what we'd hoped by this time, but then again, I'm not sure my personal goals were ever that crystal clear.

Those possibilities from 40 years ago have either been achieved in spite of ourselves, or forgotten along the way.

Life is very different.  We are very different, individually and together.  It's a very bittersweet kind of day, but a good one.  We're both here and above ground, and for the most part we still get along.

I guess that is what marriage is all about, and I guess 40 years later, I can say I finally get it.

And so that you don't think I'm brooding, about it all, here is what I posted on The Tim's Facebook page today.  So, so true, don't you think?? :-) 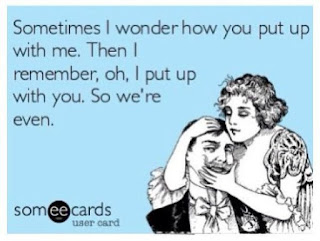 Have a good week!
Posted by Bridget at 12:38 PM
Labels: anniversary

So sweet! I can so relate, as itt will be 38 years for us in December.

Happy Anniversary to both of you! And, yes... 40 years is an incredible milestone that you should both be insanely proud of! May the next 40 be the best years ever! :)

You and the Tim sound a lot like me and Dave. We are both too darn stubborn to ever give up - though there have been a few times when we thought we might.
It's worth the struggle sometimes though. It makes you appreciate each other more.

That does seem very true! My grandmother told me that John's quirks did seem like fairly easy ones to get used to, so we should get along fine. (And heaven knows, I'm practically perfect to live with!) So congratulations on 40 years together, and I hope the next 40 are filled with lots of health and happiness.

happy anniversary!! We are too stubborn to divorce as well, ha ha. May you have many more years happily together!

Happy, happy anniversary to you and Tim! 40 years is a very long time . . . How wonderful that you've had each other -- to weather the storms and celebrate the gifts of each one of those 40 years. Best wishes for many more years to come. XOXO

Congratulations to you and The Tim. Forty years is an accomplishment to be proud of. I love your facebook meme!

40 years is amazing, congrats to both of you. Marriage is hard I think. You are always trying to mesh with someone and it isn't always easy. It's good to know that there are times that aren't perfect, but it can still be very successful. I am not sure any of us fully accomplish all we set out to when we were young. I think growing older gives you the wisdom to know that it is fine to be where you are at. Have a wonderful weekend.