This past weekend was a good one for us.  Now don't get me wrong, I seldom have bad weekends, but after last week, I wasn't sure how it would all go, since both of us were still shell-shocked.  And though we still are, especially after hearing about some new appts in the new govt (really?  alt-Right kings?), the weekend itself turned out to go very well.

Friday night we were just happy to be home together, as The Tim had been working nearly every evening since one of the other managers was out last week, and the store manager doesn't like to work the closing shift (a whole other story, not really mine to tell).  So we had a quiet dinner, and spent the evening reading and listening to music, before going to bed somewhat early out of both physical and emotional exhaustion.

Saturday we headed over to NJ to get some things done.  We stopped and got breakfast (I LOVE to go out to breakfast!), and then went to the liquor store (please do not tell the State of PA that we crossed state lines and bought liquor), Kohl's (The Tim had a birthday coupon to use), and Target, where we did some grocery shopping.  Once we got home, we did thrilling things like start some laundry, clean bathrooms, and the things that are a constant.  But we spent most of the rest of the day watching some shows we'd recorded and the Notre Dame-Army football game.

Friday night, The Tim had said, "I think I'll make a pizza for dinner tomorrow night," and I of course agreed because he makes really yummy pizza.  Neither one of us knew that Saturday was National Pizza Day, so finding that out was so fun!  Then when the pizza was ready, and I wanted to take a picture, he said, "Oh you're gonna become one of those people who take pictures of their food all of the time?"  I pointed out that I'd forgotten that I needed a blog post for Saturday, and was going to use National Pizza Day so  I wouldn't need to actually, suddenly come up with a topic!

The funny thing is, after he read all of the comments from all of you about the pizza picture I posted, he was so happy!  "Hm.  I guess people enjoy those pictures sometimes."  :-)  He also sends his thanks for all of the kind comments.

Sunday, he was at work all day, and while I was drinking a cup of tea that morning, I decided that in my current state of mind, I wanted to find out what the Jesuits were saying.  So I got myself dressed and walked across town to Old St. Joseph's for Mass.  Admittedly, I don't go to Mass on a regular basis, except I do make a concerted effort during Advent and Lent.  And I do enjoy the singing. (The Tim: "Oh yes, what a good motivation to attend church - so you can sing along."  Hmph.)

Anyway - the sermon was AMAZING.  Everything I had hoped it would be, and though it didn't mean I felt back to my usual self, it truly did help me.

After coming home, I decided that since it was such a lovely day - sunny, cool, occasional slight breezes - that it would be a good time to rake some leaves.  I enjoy it, but I am also reminded of yet another reason I am glad we do not actually have a yard.  I was out for ~1 1/2 hours, and ended up with two HUGE bags, filled practically to the brim ... and that was only from the entrances to our house! (Yes, we have two entrances. And technically, three addresses.  A story for another post.)  I was tired and decided to tackle the garden next weekend.  But I did have to fill the bird feeder, and the cats came out into the garden to "assist" me - meaning they run around insanely while I do whatever I'm out there to do. 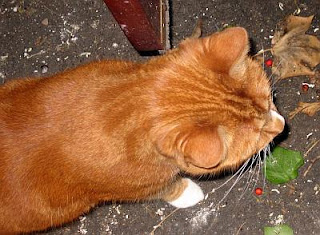 Milo the Koodle devising a plan of attack ...

I had wondered if Jack would join us, and what he would do if he did.  Hahahaha.  Silly me - of course he joined us!  Far be it from him to miss anything!  He had the best time, running around, jumping in leaves, and best of all, leaping to catch (more truthfully, *try* to catch) bugs. 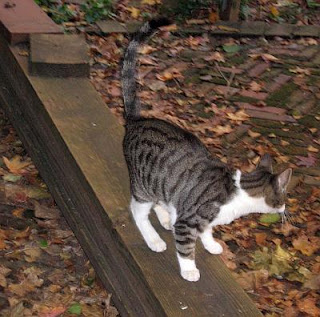 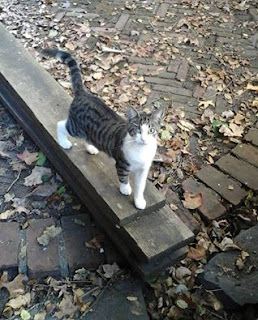 Nature boy pauses very briefly, and I get two photos are that not completely blurry!

Then I watched the Eagles-Falcons game, which was exciting both because it was a good game, and also because the Eagles actually won - go figure!

Once The Tim got home, we ate dinner, and spent the rest of the evening watching some recorded shows again, and ... I finished my Christmas knitting for family!*  This is especially surprising, since it's been really difficult for me to knit for any length of time since Jack joined the family - he likes to "help" a little bit too much ...

The down side of a lovely weekend, is that you still have to show up for work on Monday.  But at least the next two weeks are short ones - I'm taking off Friday of this week for The Tim's birthday, and next week is Thanksgiving, so it will be a short week as well.  (I just keep reminding myself of this information!)

In any event, I'll have some FO posts to share with you soon. :-)

*I finished all of the knitting I had originally planned.  I added on two additional projects, but only if I have time.  One will definitely be doable, we'll see about the other one ...

Now that was one terrific weekend! Breakfast is my favorite meal to go out for, Tim's delicious pizza, finishing Christmas knitting, and I'm intrigued by your church visit. I haven't attended in years, but would certainly be open to it if I thought someone would be saying something that would help matters. I have a friend that attends church for the peace and quiet, so I don't think music is a bad reason at all. Enjoy your short weeks!

Wow...what a weekend! I'm still so jealous that you have a husband that can cook like that.

We went down to St. Augustine last weekend to meet up with friends that live a little further south (Ormond).

We ate at our favorite food truck ......not sure Jim and Jennifer enjoyed it, but we sure did. (I think Jennifer is funny about food from a truck, whereas Steve and I will eat just about anything that doesn't run off the plate.)

Your weekend sounded both productive and restful. I hope you can share some of the finer points of that sermon, I am still having a very tough time with it all.

Sounds like a great weekend Bridget! And that pizza - I'm still thinking about it - lol. Does The Tim make his own dough? Do tell. And what did you put on it? I haven't even started Christmas knitting yet. Oy vey. I'm thinking it might just not happen...or I can give IOUs or something ridiculous like that.

It was a big birthday weekend at our house and just what we all needed, time together as a family. (This is the good part of the year when DH and I are again the same age.....) Our sermon on Sunday and some great music was helpful also. Hugs to you; I am really enjoying your blog.

wonderful weekend and when there is pizza then it is perfection!! I don't do leaves and I am quite grateful for that :)

You can never go wrong with pizza. As a Falcon fan we were really hoping for a win, but at least it was a well played game. In the same vein as a Georgia Tech fan as long as the University of Ga and the Saints are losing we really don't care how the Falcons or the Jackets do-we are very fickle that way!