Another FO, Another Gift, Almost Finished!

Around February or March of this year, I decided to knit gifts for four of my nieces and their husbands who are appreciative of knitted items.  For the guys, I chose the Turn A Square hat.  This was mostly because I've knit a few for The Tim, and not only does he love them, but he's always gotten lots of compliments.  Also, I knew the pattern was a pretty fast knit.  And one of the big things I wanted to try and do was make as many gifts as I could using yarn already in the stash.

As time went on, I also decided to make one for my 10-year-old great-nephew Zach, because he would probably like having a hat similar to his dad's.  And then, my youngest niece in that particular family started dating a guy that everyone thinks is the real deal, and they really like him.  We haven't met him yet, but he and his kids have already had summer vacation with the family, and are spending Thanksgiving with them.  So The Tim suggested he might get a hat too.

At this point, I have all but the boyfriend's hat knitted.  I know I'll get it done well before the end of November, which was my self-imposed deadline for all of the gifts.  But today I'm going to show you the one I made for my niece Julie's husband, Keith. 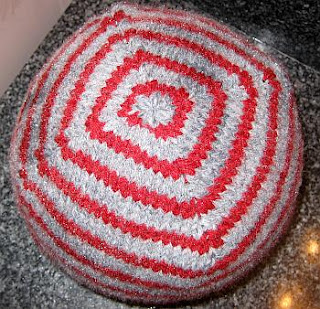 Here are the specifics of this one:

Project:  Hat #4 aka Keith's Hat
Pattern:  Turn A Square by Jared Flood
Yarn:  Berocco Vintage in Smoke (gray color); Berocco Vintage in Sour Cherry (red)
Needles:  US 6 and 7
Modifications:  None
Notes:  I truly enjoy knitting this pattern, and actually knit this hat over a weekend, while also doing lots of other weekend things.  I guess you could always knit it with several color, or as a solid, and I might try that sometime.  But I wanted these to be two colors.  If you want to knit a hat for someone, give this one a try.

And here's a bonus picture of the hat blocking, with my "helper's" paw assisting in placement of it to be just right ...  ;-) 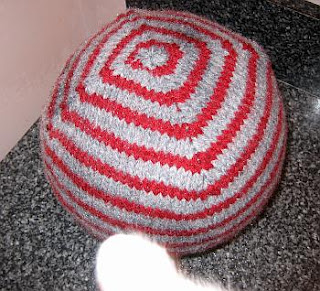 (P.S. The reason the hat looks wet in spots is because these photos were taken right after I misted it with a spray bottle to properly block it.)
Posted by Bridget at 7:29 AM
Labels: 2016-knitting, family, hats, knitted-gifts, nablopomo-2016

You are a gift knitter extraordinaire! I'm sure everyone is going to appreciate the time, love, and skill you put into all of them.

That is one of my very favorite hat patterns! It's fun to knit -- AND it's a great hat to wear.

Love this hat and the fact that you have nearly all of your gift knitting finished - well done. Jared Flood's patterns are fun knits.

That is perfect for a Christmas hat. I see Jack made the photo shoot go JUST RIGHT!

Have a happy, happy Thanksgiving!

Isn't it fun to find a favorite pattern? This one is in my pattern stash, so I need to try it. Your red and white version makes me think of a candy cane, very Christmasy!

Love it! I need to make one of those.

I've seen that hat pattern before, but never was too excited about it. However, your post has me taking another look and thinking that I have the perfect yarn in my stash for it. I'm not going to make it in time for Christmas, but I think it will finally knit one.Thank you for the inspiration!

This is a great pattern, and I know with the cold weather these will be most welcomed gifts. People don't realize how warm and toasty a wool hat can be-well done.

Those hats are going to be such a big hit! Is the red and gray hat recipient a Ohio State fan?

Great hat! I wish the people in my family were Hat Wearers, but alas! they are Not. Scarves either. Sigh.
:-(

I love this! I think I need to make one for my son! Wow, you've sure got a lot of Christmas knitting finished.....