A couple of months ago, I mentioned that I was completely blown away when I saw Liz's Clapotis, knit with some of Carol's Black Bunny yarn. I said I thought I might try knitting one in the fall, and if anyone thought they wanted to join me, to let me know. Several people e-mailed me, and said it sounded like a good idea to them. So I told everyone that I would think about some possible start dates and be back in touch.

According to several sources, the autumnal equinox this year occurs on September 23, and I thought, what better time to begin a fall knitalong? So I contacted the people who expressed an interest, and it seems like that date works for just about everyone so far. Therefore, the Second Wave Clapotis Knitalong will officially begin on September 23. We are leaving it open-ended, so no one will have to worry about being a slow knitter, and finishing by a certain date. If you are interested, and would like to join us, send me an e-mail at the address on the sidebar, and I'll add you to the list. At this point, I haven't really thought much beyond the start date, but I'll let people know details once I have some.

Carol, when I mentioned it previously, you commented that you wanted to dye some yarns if there was going to be a KAL - so you'd better get crackin'!

I realized the other day, that a) my StatCounter showed over 10,000 visits to my blog, and b) that on August 20, it will be the one-year anniversary of starting The Ravell'd Sleave. So I decided to have a contest in celebration of those two facts.

The rules are simple: just leave a comment between today, August 4, and Sunday, August 19. On August 20, I'll use a random number generator to choose a winner. The prize will be a $20 gift card from Barnes & Noble. That way, it's fair to both knitters and non-knitters. And I am all about fair (unless, of course, it's going to work against me).

Coming soon to a poorhouse near you ...

Rosie's and Loop both had sales today. Really good sales. Because I think it's important to support neighborhood businesses, I made it a point to go to both ... but that's a story for another day ... 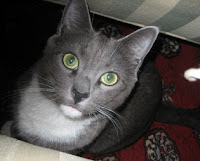 Yay anniversary of your blog!

Hey, don't blame me -- I've been waiting all this time for my backordered wool/silk. It's still not here. ):

Clapotis, eh? Too bad joining a KAL generally end up meaning Knit Anything eLse for me.

Happy anniversary! I've been meaning to make another Clapotis too, possibly for my Mom. Maybe I'll join your KAL!

Thank you for visiting my blog and leaving a comment.

I'm glad my clapotis was an inspiration. I thought for sure that everyone who has ever thought of making a clapotis had surely done it. It must have been the yarn.

That sounds like a fun KAL. I've admired the Clapotis scarf since I first saw it a few years ago. Congratulations on your blogaversary (is that a word?).

I had the chance to see Liz's Clapotis in person recently and it is wonderful! I want some of that yarn Carol!

So much for higher education for kitties! An anniversary and a milestone together, I for one, am happy we met!

You know I'm in for the Clapotis!

yup...bribing people just so they'll be your friend is sounds like something you would do goody bridget... :P

My clapotis is one of my favorite finished projects!

Every time I see the word "clapotis" I read it as "clafouti" and I think "Mmm...cherry clafoutis..." and I get all disappointed when I realize that I have no idea what is going on and settle instead for a cherry Pop Tart.

Really? I'm afraid read it as "crap-o-tee." Here's hoping that won't be prophetic when I join in the Second Wave Clapotis along.

The start date is perfect. Looking forward to it! :)

Congratulations on one year of blogging! Looking forward to following you in the time to come!

Wow a year of blogging - where did the time go.

Love the kitty shot - was this before or after you got the yarn out of the bag?

Congratulations on your approaching anniversary.

I picked up my yarn for the Clapotis this weekend. I'm ready - well I have to wind the hanks - but I'm ready and looking forward to it.

Happy blogiversary! This is a lovely blog. Also, I'm interested in starting a KAL, but don't know how to go about it. Advice would be great.