The Return of Knitting!

This past Friday, I had a follow-up appointment with the doctor who had performed my hand surgery, and he was very pleased with how well my hand had healed, and also with how well I have regained my range of motion. He said that any residual pain and/or tingling was just a matter of the nerve still recovering, and that as far as he was concerned, I had no restrictions, and should just go back to any activities that I wanted to do.

So yesterday, I decided that I was going to knit for a while, no matter what! Admittedly, I took a Vicodin to see if it would dull the uncomfortableness enough for me to get started, and it did. So while The Tim, Sebastian, and I were watching the movie, "Fido," I finished knitting the bag I had started back in September, and here it is, pre-felting:

I'm so pleased with how it turned out, and am especially pleased that I managed to make the twisted handles! Yes, I know that i-cord is short for "idiot cord," but until yesterday, it has always alluded me. (Apparently I need to be drugged in order to be able to grasp the concept ...)

It took a couple of times through the washer, but it is currently stuffed to create its shape, and drying. Once it's really finished, I'll post another picture and info on the pattern and yarn.

Of course, today my hand is killing me, but I have a lot of other things I want to do today, so if I try knitting at all, it will be later. If it's still so sore, I'll just wait another day or so. None of my current projects have deadlines other than ones in my head, so it's not like it will ruin anyone's birthday or Christmas gift.

It was so nice to be able to knit again!

Friday night, we went to see "To Kill a Mockingbird," at Sebastian's school. He played Walter Cunningham, and he did really well. You could both hear him speak, and understand what he was saying. Plus, we all agreed he was very believable in his portrayal, and voted him Most Likely to Head a Lynch Mob ...

Really though, Seb did a wonderful job, as did the other kids in the show. It was an impressive production, and the actors all seemed to be well-prepared. Fortunately for me, there were no missed cues, mishaps of other kinds for the actors, or anyone who froze on stage. The reason it's fortunate for me, is because if any of those had occurred, I would have had to leave the play and wait in the car, due to excessive laughing. (Because I'm apparently 12 years old when it comes to stuff like that.)

No matter how you look at it though, Seb was the best. And we were really proud of him.

I am always thrilled when someone leaves a comment, but wanted to let you know that I don't always receive your comments with a return e-mail address from Blogger. So if you have left one or more comments, expecting to hear from me, and you haven't, I do apologize, but if I can't locate your e-mail address otherwise, you won't get a response. I just didn't want people to think I was ignoring them!

Now I must sign off, since I am off to a few shops to see what else I can find for a birthday gift for The Tim, who will be celebrating said event a week from today.

Before signing off though, I would like to wish you a Happy Veteran's Day, and ask that you take a moment to say a word/prayer/whatever of thanks to those who have served their country. Even though my political views are not very miltaristic, I think it is important to remember that all veterans deserve our thanks and respect. 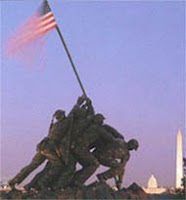 What a great post - so full of interesting stuff. Love the bag - your color choice is stunning! Also, you made me laugh about how you might feel the urge to laugh inappropriately - that is so me also. Why? Why? Apparently I also have the maturity of a 12 year old. Finally, my Dad fought in the fox holes in the Korean war and I appreciate your thanks to our vetrans.

So sorry that your hand hurt post-knitting. To be expected, I suppose. Thank goodness there was still Vicodin in the (wait for it. . .) house.

So today, I decided that I was going to read your blog for a while, no matter what. Admittedly, I took a Vicodin to see if it would dull the uncomfortableness enough for me to get started, and it did!

Um, just kidding.
Glad you're back at the needles.
I agree w/ you 100% about the Veteran's Day thing, too. One of the many irritating things about today's political climate is the mistaken perception that you can't oppose a war without opposing the poor souls fighting it. Like you, I honor and respect all those who served and are still serving our country.

To Kill a Mockingbird! Love it - heh, guess who my Atticus is named after?!

Well, in time your hand will heal, and the pain will subside. You do need to work it, but be gentle!

Glad to see you back knitting! Speaking from experience with a hand injury, don't overdo things, or you'll regret it later.