That's the subject line of my friend Lisa's e-mails when she hasn't heard from me for a while. Never fear, I'm still alive and kicking, just busy with various things that have kept me from writing a post recently.

I've had it in my head for a while to "remodel" the blog, but I have no idea what to do. I've fooled around with the other available templates on Blogger, but none of them really grab me. And I don't know enough to create a custom template of my own. Then occasionally I see nice templates on other people's blogs who use WordPress or something else and think maybe I should switch to that. But I'm not sure that would be any easier in the end, so I just get frustrated and stick with what I have ... the weird thing is, it must be something that is going around, because a lot of other blogs I read are remodeling too! If anyone has any brilliant suggestions, or recommendations, please feel free to pass them along.

Anyway, time to move along, people.

Melanie and Ann and Liz both named me for a You Make My Day Award, which I take as a great compliment, thank you! I will admit that it has taken me a while to get around to it, so a lot of people I may have given it to have already received it (some several times!), so I didn't want to repeat that. I'm supposed to name ten other people, so I decided to name some of the blogs that I read (though not all have been added to my sidebar yet), that as far as I know, haven't been named yet. So here they are, in no particular order:

1. Anne, of The Bookworm's Knitting
2. Dave, of Criminy Jickets
3. Debi, of FluffyKnitterDeb
4. N. Maria, of The Knackful Knitter
5. Mary, of Pembroke Purls
6. dmaxi, of Under Me Oxter
7. Yoko, of The Ballad of Yoko
8. Brigitte, of Wrapped Around My Finger
9. Lorraine, of Sheriff of Knittingham
10. Wendy, of Knit and the City

I really enjoy reading these blogs, and am always happy to see new posts in my Bloglines.

Brought to you by the Letter C 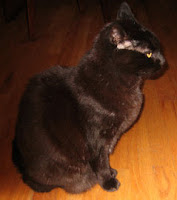 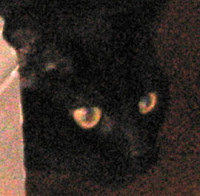 As you may have noticed, Chumleigh and Clancy are black cats. They live with my niece Amanda and her husband Patrick in Baltimore, and we visited with them this weekend. My nephew Zachary turned two years old on Friday, and his parents (my niece Liz and her husband Greg) had a birthday party for him. So we stayed at Amanda and Pat's house, and I decided that even though I have an infinite number of pictures of my own kitties, I'd make these two the stars for C in the ABC Along. Chumleigh is striking his best John Barrymore pose, and Clancy is concentrating on watching the laser toy so that she can kill it! They are extremely sweet cats, and we enjoy seeing them as much as getting to see everyone else.

Our trip was a lot of fun, and we were glad to be able to go to Zach's party, since we don't get to see him as often as we'd like.

That's it for now, time to catch up on some movie-watching ...

I'm honored (and humbled) to be on your list. Thanks!

Thank you, that's so sweet. I very much enjoy popping over to see what you're up to as well.

A well deserved award, you certainly make my day! About the blog thing? Just go register a blog with a couple of other hosts, it's free and if you decide not to use them, you can always hit delete. I did...

Wow - and the eyes have it. Clancy reminds me of my sister's cat (also black) who is so dangerous and territorial that I was unable to leave poor Mr Puffy outside on the patio for fear of what would happened to him! I was prepared to incurr the rath of my brother-in-law who does not allow pets inside. I too feel the inertia of remodeling - I would like to have more flexibility with the heading top. When I'm back in Topanga on wireless I'll have to check out your blogging friends.

I'm feeling the need to update too, but I can change my template in Typepad without having the "crossover" issues that some people have when going from one host to another. I wish I could give you more advice than that, but I'm really not very knowledgeable with computer things.

Thanks so much - it's always great to see what you're up to as well.

I think I may have to join the blog ring as well.

Thanks! You make my day also. Always interested in what you and the cats are up to.

Great list of fab blogs! I love the Clancy and Chumleigh pix, nice of your niece's cats to step in and represent the letter C. A very important letter.... :)

Having a Rearrange-the-Furniture feeling? Just don't switch to black background w/white typeface pretty please. I can't read those at all. I have to highlight the text.

Thanks Briget, I empathise with the wish to change blog templates. It really takes forever to go through all the options. I only got as far as the first page of options on Wordpress and started to lose the will to live.

I'll be embarrassed by the state of me blog now, if your nomination increases my readership! Thanks for that all the same, I'm really honoured. Off to do some re-decorating...

Aw, thanks so much Bridget! And I love reading all of your posts as well, you always make me laugh.

Chumleigh, heh, what a great name!