As promised, here is a picture of my latest finished project, The Sailboat Hat: 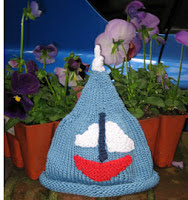 I am so pleased with how well it turned out, and how even my somewhat lame sewing skills managed to place and secure the applique pieces so that it actually looks balanced. Personally, I think it looks yar!

For those of you who are interested, here are the details:

I think that Ben and Halden will really like it. (Doughboy will like it if I show it to him while also holding a treat ...) And hopefully, they'll give us a picture of the baby wearing it. If so, you know I'll post it here.

In other news, look what Brigitte sent to me!

This is adorable! It even includes Timmy (the littlest sheep), which I may just have to make for The Tim.

(I never doubted that someone with such a lovelly name, who also has cats, would be nice - but this is extra nice ...) Thank you so much, Brigitte!

Except now I have the song in my head again ...

Adorable! I love the patterns in that book, but I hadn't seen this one yet. The applique is perfect!

The Tim should be honored.

And the hat could not be cuter.

Any advice for how to get that awful Styx song out of my head? Sigh.

But that hat is adorable!

That might be the cutest hat yet! And the Shauns! Just wonderful.

Carol - be glad you only have the Styx song in your head, because the Shaun the Sheep song would drive you even crazier!

Awwwww- Imagine having little Shaun's floating over your head?

..and the Styx song is now an earworm for the rest of the day.

Congratulations on the hat - that came out really well. Such a cute mobile - I'll be curious what the individual sheep look like and if it's an easy knit - cuz I'm still in search of the most simple and quick but still cute baby gift.

Great! I hadn't even associated your title with the Styx song until someone mentioned it. Earworm, indeed.

That is a very yar hat.

Wow - Shaun the sheep. I think Zack needs at least one if not the whole gang.

It will be a blast to see what his dad and the uncle's do with the sheep.

Lucky for me I have *no* clue what the Shaun the Sheep song is! But Styx songs...ugh, oh no...

You're welcome! I'm so glad it found a good home!

I bought the magazine just to get that pattern! The hat is fabulous! I love beebe hats :)

That mobile pattern is GREAT!!! Shaun is my second favorite character (second only to Gromit) in the Wallace and Gromit world.

That hat is so cute! For a baby? lol. How do some people manage to dress themselves in the morning? You just have to wonder.

I keep thumbing that book at my LBS, but haven't picked it up yet. Not as many babies lately. OTOH, it's just a matter of time again, no?

Bridget Ben and Halden will love this!!! The hat is FABULOUS!!!!! and I am laughing so hard at the shaun the sheep mobile!! That is the cutest thing ever... but yes alas.. THE SONG IS IN MY HEAD.... It's sean the sheep. . Its sean the sheep.. If Zach were here he'd be dancing in a circle!