Yes, I'm changing the subject, because it's June 8 (only June 8), and it's way too hot and way too humid, and it's not even really summer yet, and it's one thing to have this weather at the end of July or during August, but having it now sucks, and it shouldn't be allowed.

Instead, how about a picture of a pair of socks underway? 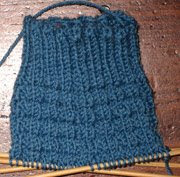 I started these last week, and actually the second sock is started as well, at least the cuff is finished. When I have two balls of yarn for a project, I try to knit them together, so that by the time I finish one, I only have the toe of the other to do. So I knit a cuff, and then knitted this cuff, and then started down the leg. When I get to the heel of this one, I'll knit the leg of the other one, and so on.* But I digress ...
These are a Christmas gift for my nephew Chad. I know I haven't shown you any of the other gifts I've knit so far, other than on Ravelry, but I figure it's safe to show you this one, since I know that neither Chad nor anyone in his family ever reads my blog (or even remembers that I have one), and none of his cousins will blab (right Amanda? La Liz?).
Anyway, they are a nice easy pattern, and they go along pretty quickly, which is a nice switch from the Hedgerow Socks that I am in the process of finishing, and that you can only see on Ravelry (sorry). They are turning out really great, but take a bit of concentration and attention.
Speaking of Ravelry, I put these two groups of yarn up for trade or sell there last night: Heirloom Breeze in lavender (7 balls), and Rowan Summer Tweed in medium purple (4 skeins total, 1 of the skeins wound into a ball). There's nothing wrong with either, but the Heirloom Breeze just didn't do it for me, and I tried using the Rowan Summer Tweed, and didn't enjoy knitting with it. If you are not on Ravelry, and think you are interested, let me know, I'll send you a picture so you can see if you like it. (I tried posting pictures here, but Blogger got weird, and I'm not in the mood to fight with it at the moment.) Edited June 9, 2008 to add - Summer Tweed has been sold.
In news that sucks, I saw Ben and Halden today, and as of yesterday, they have a contract on their house. The closing date is set for July 25. Which means that not only will they and their new baby (due at the end of the month) be moving, but also my true love, Doughboy. Le sigh. Ben told me the people who are buying their house have a cocker spaniel, which I was glad to hear, but let's face it, that dog won't be Doughboy. Hopefully the new neighbors will be people that we like, and will let me take care of their dog when they go away.
By the way, I know that news does not suck for Ben and Halden (though I know they wished they could stay in the neighborhood), it's great news for them, and for that I'm happy.
That's about it for this installment. Time to go and drink another 5,426 gallons of water, and slosh my way through the evening ...
*Yes, I could do the same with one ball of yarn. But I am too lazy to divide it into halves and wind them both. I can live with it.
Posted by Bridget at 6:44 PM

I hear you on the Summer Tweed...

Gosh I haven't knit a pair of socks in 4ever! I'm probably going to take the monkey sock pattern on a quick trip we have coming up as there's nothing like airport travel that says socks to me. I'm sorry you have a nice neighbor leaving - but if the new neighbors have a dog there can't be much wrong with them!

But will the cats accept a new cocker neighbor?

How much ya want for the Summer Tweed?

The socks are lovely!

Maybe you could spare just a little of that heat to us here on the west coast. Our furnace is actually kicking in in the mornings. Crazy!

Hot here too. It's my fault, knitting with wool.

How insensitive of the neighbors to take Doughboy from you! Yeah, yeah, yeah, good news for them. Why is all about THEM? lol.

Bridget- I've put stuff up for sale on Ravelry, and to my surprise, sold most of it.

I live for the 3Hs, so I'm in heaven right now. It's the only time of the year I'm not cold and don't have drink ninety million gallons of hot tea to stay warm. I can also wear short sleeved T-shirts *without a sweater.* Anyay, I hope those socks are going well for you, and I am all about knitting two things, aka sleeves or cardigan fronts, at the same time. No going back to start over again. :)

Sorry, so far behind on my blog reading but ...

One of my absolute favorite read is William Faulkner's The Bear. Really, give it a try. I re-read it once a year at least. And read his acceptance speach for the Nobel Prize too. So inspiring.