The letter M and the letter N

I have fallen behind on my postings for the ABC-Along 2008, so today is for some catching up!


M is for Molly Bloom

This is a picture of our first cat, Molly Bloom, as a kitten (as a matter of fact, it was taken right after we brought her home from the shelter). Look how small she is! She never got a lot bigger, but I am 100% certain that she thought she was as big and as ferocious as any tiger.

Molly joined our family when we lived in Chicago. She was 6 months old when we adopted her, and since six months previously was June, we chose June 16 for her birthday, and named her Molly Bloom. She was (and still is) the cat against whom all other cats in the universe are measured.

She was an unusual cat, in that she loved to ride in the car, she played fetch, and she even took a little jaunt with us in a motorboat owned by The Tim's brother, along the Ohio River! She was quite the traveler, usually accompanying us on any trips home to visit, where she would curl up on the front seat in between us, with one paw touching The Tim (her true love), and sleep until we stopped. Then she would have to get up to see where we were. We gave more than one toll-taker on the Pennsyvlania Turnpike cause for a double take, let me tell you!

She loved dogs, but was not overly fond of other cats. She enjoyed visiting people (whether or not she had been invited), and would easily make herself at home just about anywhere. She was not pleased when other cats started to join the family, though once she realized that she could rule the others, all was well in Molly-land. We always told her that she was "the original, and still the best" and that is still true today.

She died from cancer about 10 years ago, and we still miss her every day. But we also know she is looking out for us, and believe that she is completely in charge wherever she is!

Whether playing with string, or cuddling, she almost always had this serious look on her face!

(Attention April - this is especially for you!)

For thoose of you not familiar with this term, the definition is here (it was one of my mother's favorite descriptive terms). Remember Gladys Kravitz, the across-the-street neighbor on the TV show "Bewitched": 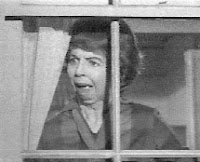 Well, she is a perfect example of a nebshit. Always poking her nose into the neighbors' business, watching them out the window and placing her own (usually terrible) interpretation on what she saw.

I chose this for the letter N because I think all of us know at least one nebshit. I know several, to be honest. I work with a few, one in particular who drives me up the wall, pulling mail out of my mailbox to tell me what is there, or to comment on it, or walking up behind me and reading e-mail over my shoulder - aaarrgghhh! True nebshits are seldom treatable, as they do not see themselves as such, and even if you say something or get angry, they miss the point entirely.

And yes, I can be a nebshit as much as anyone else can be. (However, I was taught some manners as a child and so am able to control myself most of the time!) I truly believe that it's one of those things that is somewhere in all of us, but some people just have no filter for keeping it to themselves, or stopping themselves from snooping, eavesdropping, etc.

Often my response is to find a way to leave something around, or write something on my calendar, etc. that is totally wrong, to see if they comment. In a previous job, I was in a four-person department where our boss was a nebshit. The other three of us agreed to periodically write on our calendars things that were shocking or suspicious, to see if the boss commented (and trust me, she did). Once we decided that we would all write in lunch dates with the others' spouses. I don't know if she ever said anything to anyone else, but I didn't hear a peep out of her.

Besides which, she never ever commented on anything else like she had before either ...

I loved hearing about Molly. What a character - it's like someone forgot to tell her she was a cat! I can see why she is still special in your hearts.

Believe me I've worked with nebishy people - and worse!

it's moments like this that remind me that i love so much i would actually go and kick a small child in the face if you asked me to.

you set up the post w/ a lovely tribute to molly and then follow it up w/ a glorious ode to hater-dom. high aloft on is pearly throne, sheldon jackson just shed a tear for you madam.

I love, love, love that word! I feel like doing a sampler that says "nebshit," surrounded by some well-chosen symbols...

Bridget- To all the cats I've loved before... that should be song.

I've come across my share of nebshits- I always think they have too much time on their hands.

Finally a pic of the one and only Molly. Thanks for sharing.

Also thanks for the laugh - It will help get through the next week.

Aw Molly, you remind me of my sweet Enya...

Molly sounded very much like our Sunshine, who died a year ago July. She was what I call a "Ma Bell" cat: she liked to reach out and touch someone. In the car, she had to look out the window. If I asked her to come nap with me, she'd use the kitty question, "Mrrph?" and when I told her yes, I did mean her, she would trot on ahead of me and jump up on the bed. I love those total puppy cats -- smart and lovable and funny. It was such fun reading about Molly Bloom. Thanks for sharing that. You've brought back great memories of my all-time favorite kitty.

B. there's an alanis siting!!

Miss Molly is a once in a lifetime cat. I think when a boss is a nebshit, it's called micro manager. A true pain either way...

Molly Bloom sounds like a magnificent cat. Her fierce beauty is so much more compelling than a simple doll-face.

I loved reading about her.