Ah, "Jeopardy!" How I used to love that show. Even after Alex Trebek took over, and I decided that he was just unbearable, I could still watch. But then they dumbed down the questions, and it was just too frustrating and painful to watch the contestants miss questions like "What state shares part of its name with North Carolina?" to which they would answer "Delaware."

Anyway, I am feeling somewhat scattered at the moment, so "Potpourri" seemed like a good description for this post. (Maybe another time, I'll do "Potent Potables" ...)

1. Office supplies - one of my co-workers sent this picture around in an e-mail, and I think it would be an excellent addition to practically any office's supply closet. 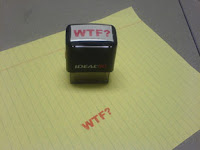 The Evil New Boss asked me if I had seen the e-mail when I had one of my approximately 600 daily meetings with her. I said I had, since the person had sent it to everyone. ENB said that it "disturbed" her to even think someone would create something like that even as a joke. I said nothing aloud in response, but my brain was working overtime. Good grief.

2. In late September, when Doughboy visited, we headed up to Rittenhouse Square in Philadelphia for the Carnavale of the Dogs 2008, an event sponsored every year by Commerce Bank. It was a lot of fun, though I think Doughboy was stunned to see so many dogs all at once. One part involved a costume contest. We met a full-bred Newfie (Doughboy is half Newfie-half Chow) who was dressed as Barbra Streisand:

Doughboy found her quite fetching. 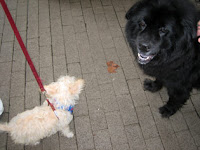 Then we saw this pup, who is the opposite of Doughboy in every way, but was thrilled to see him nonetheless.

4. The election and digital TV - I will be happy when the election is over, as I am tired of the campaign commercials, but I will be even happier once the switch to digital TV occurs in February 2009. Those commercials are bugging me even more. Yet you know there will still be eejits who are puzzled when it happens, 'cause they had no idea.

5. Knitting news - I have an FO that is blocking as we speak! Yes, I do actually finish things from time to time, believe it or not. I'll show you a picture in my next post. Yep, I can show a picture of this one. Gives you something to look forward to, huh?

6. Zach Attack - I've saved the best picture for last. The weekend before this past one, my niece La Liz, her husband Greg, and Zach came for a visit. The weather was great, and we had such fun with them. Zach and Jetsam wore each other out, and we did a lot of walking around. But of course our first trek was to the playground, and on the way, we stopped in Fitler Square, where there are several animal sculptures that kids especially love. La Liz took this great picture of Zach by the turtles.

Now is that one cute kid or what?? And I have to say, he is one of the nicest, most well-behaved little kids I've ever been around. (And though I am biased, I've also been around LOTS of little kids. Most of whom behaved appallingly. The little darlings.)

OK, I guess that's enough rambling for now. But don't worry, I'll be back with yet another fascinating post soon!

I would like to stamp one or two of the people I work with on the head with that stamp!

Hmm. My heart just aches thinking that you have to work with a person who is so irony-deprived that they are troubled by a "WTF?" stamper. Me -- I wanna go out and get one, and supply one to every middle manager in America.

Bridget- I was wondering about Doughboy- we grew up with Chows- he had a certain look to him.
But I love Newfoundlands- such big heads, and lovely temperament.

I love the turtle pic- he looks like a real sweetie.

I never knew there was a time when Alex Trebek *wasn't* the host of Jeopardy ...

And I love, love, love that stamp - although I think I would be tempted to use it to often, and to my own detriment.

Love the pics - so cute!

Zach is adorable. Glad to hear he behaves as nicely as he looks.

And WTF? She's "disturbed" by that? Good grief. Did you see Chartroose's post on new words/acronyms? Brave New Words.

"What is South Carolina, Alex."

I'd love to get one of those stamps for our office!

Is the digital TV switch happening that quickly? I had no idea... I guess Santa better bring me a new TV.

That is a great stamp. Too bad your boss couldn't just give a chuckle, delete the email, and let it go. Sometimes you have to laugh at corporate American or you'll have a nervous breakdown, no? :)

Love the pic of Zach. When did he grow up and become a little boy - no more baby in him.

ENB - enough said!!! But how do you get all these inquiries and I don't.