Last week was our final week of training to be tour guides, and we were really busy! First thing, we had a history test, to see if we were absorbing any of the info we had been hearing and reading. (I think I did OK.)

Then last Wednesday, we spent the day at Graterford, which is Pennsylvania's largest maximum security prison. It is located about thirty-one miles outside of Philadelphia. We met an inmate - a "lifer" - who had started out at Eastern State back in the late 1960s, and then had a tour of the facility with the Superintendent's Assistant. The person who had been running our training said that we were making the trip for a few reasons. First, to see a currently active maximum security prison; then to see how we thought it compared to Eastern State; and, finally, he thought that by talking to an inmate, and seeing how the prison was set up, it would remind us that the inmates are actual human beings with feelings and thoughts.

It was really interesting, but also very depressing. The look from the outside was just plain old dismal, though it is in a very bucolic setting. But the green grass and sunshine are suddenly interrupted by a tall, gray, concrete wall, and signs warning you of all of the things you can and cannot do upon entering the prison. We were all signed in by one of the Corrections Officers, and then our tour guide took us to the room to talk to the inmate. He was probably about 60 years old, and has been in prison for approximately forty years, and will be there until he dies (in Pennsylvania, a life sentence equals life without parole). He had started serving his time at Eastern State, and it was fascinating to hear him talk about the place when it had been operating as a prison. Of course, time and distance probably made a lot of it seem better than it actually had been, but we had lots of chances to ask him questions, and he was very willing to answer them. He told us that he knew that it was entirely his own fault why he was there, and he deserved to be in prison for his crime (murder), but that every single day he realized that one second of stupidity put him there forever. He talked about his victim's family, and his own family, and how he really doesn't know his children at all. You could have heard a pin drop, he had everyone's attention so thoroughly!

Then we had our tour, seeing the cellblocks, shops, exercise yards, followed by lunch. (Note to self: Prison is not the best place to be for a good vegetarian meal.) We got to go into an empty cell to get an idea what the size of it was for two inmates (can you say claustrophobic?). We were then planning to leave, but had to stay an extra half hour while the guards' shift change took place. I was more than happy to finally be out of there!

I cannot imagine in my wildest dreams why, if you even ever just saw the place, you would ever in the universe think of committing any crime ...

The rest of the week was more information, some safety and security drills, an operations test (once again, I did OK), and a scavenger hunt. For the scavenger hunt, we were teamed with another person. It was fun, though we were running around in the cold rain, which was not all that pleasant.

Friday, I had originally planned to go to see Franklin at Loop, where he was signing his book, It Itches. Then I noticed on our training schedule that we had a Full Staff Meeting to attend that didn't start until 5:30 p.m., so I was kinda disappointed, thinking I might not make it. I didn't, but it turned out that it was all OK. The "Full Staff Meeting" was actually a little "graduation" ceremony for us, where we got our staff IDs and keys. There was champagne (and soda for those who didn't want to imbibe), and a toast to the 2009 season. But what made it all better than the best was that this all took place in the central guard tower of the penitentiary, with an amazing view of Philadelphia! Even though it was slightly cloudy, it was clear enough to still see for quite a few miles. I borrowed a camera and took some pictures, so if I get the copies, I'll post them here. It was one of the coolest things EVER!

So tomorrow, I will be released on an unsuspecting public for my first day as a tour guide. Hopefully it will not be too cold, since at the moment, I only have a short-sleeved uniform shirt to wear. The "season" officially starts April 1, but tomorrow is a free preview day - I guess equivalent to a dress rehearsal for a play.

Who knows what I will tell people when they ask me questions??! Hopefully, something with at least a kernel of fact involved. :-)

And, since I haven't had a post with a picture for a while, here's one of Jetsam and GK, right after GK had jumped up on the couch while Jet was sleeping. As you can probably guess from the body language, it didn't end well ... 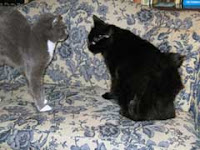 Bridget~
WOW! What an adventure! I can't imagine being in a prison. And I always wonder how I'd survive the food, being a vegetarian. Guess prison is NO place for Miss Priss!
I bet it was a fascinating time though!

I went through San Quentin when I was in college and spoke with an inmate who was in for his second stint. I asked him what he had done and he said, "Murder." I said, "Who could you possibly hate enough to consider coming BACK here?"

The gas chamber was creepy; but not as creepy as learning that people petition the state to be allowed to watch an execution.

Great story on why you missed the fun Friday.

Oh, I know that look quite well...

As I was reading you entry, I couldn't help but wonder as well - why would anyone want to do anything to end up in a place like that??

We missed you, but it sounds like things are going well with you and your orange jumpsuit. I will see if I can take a tour one day when you are on duty. Maybe Elvis would like it -- and I can try to scare him straight. (On second thought, maybe it's his sister who needs to be scared straight....)

Yeah --- had a school field trip to TN State Prison once. Can still see the cells, the walls, the electric chair. Grim.

Wow! That part about talking with the inmate made me a little teary. I felt sorry for him, that he wasted his life for a moment of violence. Very good post, Bridget.

Do you get to knit your own orange jumpsuit? Did someone ask you that already?

Ghost Hunters did two epis there with what I believe was carefully staged footage of a jawa, wearing sneakers and not being sneaky. They claim it's real. I say ha.

Best of luck for the new job. I'm sure you'll do well.
Just remember to breathe and imagine all of your tour group in their underwear.

I think it just the most fascinating thing that you have this job. How the heck did you get interested in this?

i think i need to plan a trip to ESP just so i can come talk to you while you work, like i did at your last job... ;)

Bridget- Perhaps if more people knew about the reality of being incarcerated, they would think twice. But it isn't human nature to consider the consequences, is it?