A Walk through the Neighborhood

Today was a beautiful, warm day here in Philadelphia. The type of day when you know that if you do nothing else, you'll take a leisurely walk. Add the bonus of having Doughboy visiting for a few days, and I had the perfect walking companion. So we headed out after breakfast this morning, to see what we could see.

One way you can always tell when there is a nice break in the cold weather is the return of sidewalk tables at the local coffee shops, restaurants, and the little French cafe.

Though Doughboy was disappointed as we walked by that no one offered him a taste of their breakfast croissants ...

Then on to Fitler Square for a picture by the fountain, and a good roll on the bricks (you'll be glad to know that I refrained). 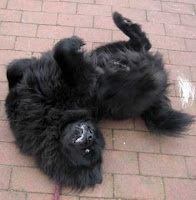 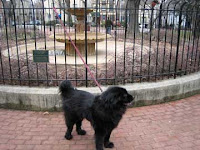 Next: the dog park! Such excitement! Doughboy found many friends here. The picture on the left shows his new buddy Connor, the Irish Wolfhound, then the fuzzy black thing is the back end of Doughboy, and the pup in front goes by Abby the Labby.

In the picture on the right, you can see Connor and Doughboy in an activity that is apparently much more fun than it looks to be. They would do this Follow the Leader thing back and forth, one way with Connor leading, and then on the return trip, Doughboy would be in front. Occasionally the other dogs would stop, look at them, and you could see them thinking, "WTF?"


From there, we walked towards the Schuylkill River Banks Trail. On the way, we saw this interesting wrought-iron railing. I like it because it's green, rather than the usual black.

These next two pictures I took while we were resting on a bench after walking on the trail for a while. This one is the Walnut Street Bridge, with the Old Post Office, and a newer building, the Cira Centre, in the background. 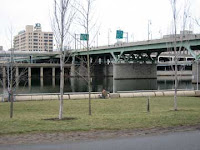 This one is more at trail level, showing the river, and if you look very closely, a lone fisherman sitting in a chair hoping to catch something. Personally, I would not want to catch anything from the Schuylkill River ... but there are usually people fishing there, who I imagine would think my knitting was weird, so to each his own.

From the trail, we headed home, after stopping at Metropolitan Bakery for a doggie treat (not that we spoil Doughboy or anything).

Here is my favorite picture from the walk. It was taken while we were sitting on one of the trail benches, enjoying watching the world go by. In my pictures folder, this is called "Happy, drooly, blurry." 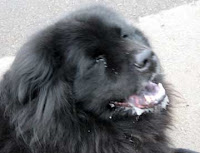 I love Doughboy. He is adorable!

That is one very happy and very adorable dog. It must be the fact that he is being walked by such a loving and photographically talented lady.

What a nice way to spend a day. Makes me wish I had a dog.

I just love Newfies! Looks like a good time was had by all.

Bridget- Rolling around on the bricks? Don't knock it 'til you've tried it!

Your post almost justifies living in a city! Can't do anything like that in the middle of nowhere (which is where I live).

I'd pay admission to see you rolling on the bricks...lol.

Great to see someone was able to properly enjoy the wonderful day.

Bridget~
Thanks for sharing your walk with me. I love Doughboy!
We had a beautiful day like that here on Friday. I walked Gabby all over town for hours, stopping in our local coffee shop and at the library! AAAhh! Spring is coming!:)

So glad you had a lovely time with Doughboy after that horrible dental incident! I do hope you are feeling better enough to enjoy this burst of spring.

Yeah, I see people fishing in Lake Ontario, and I'm thinking...you must be high.

Dogs crack me up. I love the way they introduce themselves by sniffing...certain...areas...

I LOVE Doughboy! Hug him for my next time! :o) So glad you all had a nice little outing on a fine day...Fun to see some Phillie sights...ah....Happy Days ((HUGS))

Happy drooly blurry is my favorite pic. Nice town though! Better than the dentist, that's for sure. All healed? I cannot believe you dont carry a cellphone for the convenience of your dentist's receptionist.