A Little Bit of Catching Up ...

I just realized the other day that I mentioned that I was ready to start knitting the Silk Kerchief once I found the right sized needles, and then didn't mention it again. Because I am sure you have been wondering what happened, I thought I'd show you what I have finished so far:

I did find my size 3 circular needles, and though I didn't quite understand the casting on, I worked out something that seems to be OK (or at least if it isn't I'll never really know). The pattern is fairly straightforward, once you get past the cast on, and I'm pleased with how it is turning out.

However, I have decided that I will never again use this yarn - Noro Silk Garden Sock - for anything! I really do not like this yarn - it feels uncomfortable (maybe it will feel better once the thing is washed and blocked?), and it twists like crazy, not to mention knotting all of the time. If I make another one, I'll definitely choose another yarn.

I mentioned in my previous post that Doughboy was visiting last weekend. He slept over on Saturday night, and he was such a good house guest, as usual! I think he enjoyed himself, and in this picture, it looks like maybe he is smiling - what do you think?

When it was time for him to go home on Sunday evening, the whole family stopped for a visit, which meant that we got to see this sweet little face: 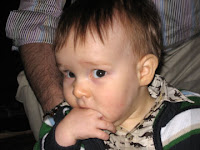 Look how big James is! He'll be a year old towards the end of June, and he is such a cutie. We had a good time visiting with Halden and Ben, and watching James and Doughboy interact. James is currently fond of giving everyone the raspberry, which was pretty funny. And then when someone would laugh, he'd do a really fake-sounding "hahaha" which would of course make everyone laugh harder.

He has also started talking. What was his first word? "Dog."

So he is apparently pretty smart as well ...

Aw, Doughboy does look like he's smiling! Hee hee - my first word was "Blackie", the name of the dog next door...

Doughboy does look like he's smiling! James is a cutie. I think blowing raspberries is being reinforced. ;) Dog?? Dog? Where are the cats? lol

The kerchief looks cute! Noro has quite a reputation. I've just got some, I've never tried to knit it. Now I fear to.

I love Doughboy, he looks so huggable! I would like to ruffle his ears.

I've only used Noro yarn once and it certainly didn't make me want to run out and buy more Noro!

LOVE your kerchief. I'll have to update a photo of mine so you can appreciate your Noro, by looks alone if nothing else.

I think "dog" and "cat" should be every baby's first word! Smart kid...

Yes, Doughboy does look like he's smilling. And, before you enlarge the picture to check it out, he actually looks like a bear cub. Only without the threat of a mauling mother lurking in the shadows...

(I couldn't agree with you more about the Noro...ugh)

I love our cats, but I miss our dog. She was a sweetie.

Your Silk Kerchief looks great! I love that design and have to make myself one ~ I'm curious how it seems to stripe by itself. Good to know about that yarn. Probably a good bath and hair conditioner will help.