Yesterday and today have been my days off work for the week, and I've really been enjoying myself. The weather has been nice, and I have accomplished quite a few things that I had on my list. (I had to be sure to leave something for next week, you know ...)

Anyway, I meant to post yesterday, but I spent a good portion of the day working on this: 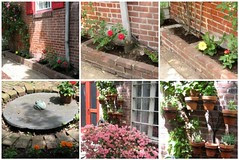 I had an appointment in the morning for bloodwork, and decided that the afternoon deserved to be something more enjoyable! On Sunday afternoon, after we had finished our walk with Seb, Karen, and Doughboy (!) in the Mother's Day race here in Philadelphia, The Tim and I headed to Home Despot (Home Depot, for most of you). He had some "fixing-up" stuff to get, and I wanted to get some flowers and some herbs. Every time I thought I'd get some things in the last few weeks, it's either been too cold or raining to make me feel inspired enough to even pick something out ...

We have a planter on one side of our house that gets a lot of sun, and then our garden has spots of sun and partial sun. I also like to grow herbs, so I wanted to find some to at least feel like I had a chance to get started.

But do not fear - even though I didn't post yesterday, I did manage to have Jetsam pick names for the two books I was giving away. 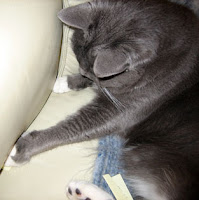 "YIKES! It's trying to escape into the chair cushion!" 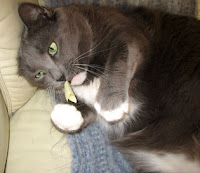 Congratulations to both of you, and thanks to everyone who entered. Sprite and Bookfool, please send your mailing info to me (thekittyknitterATverizonDOTnet). Just so you know, I probably won't get the books in the mail until early next week, since I am working tomorrow through next Monday, which means I won't be able to get to the P.O.

Be sure to watch this space, since I already know I'll have a couple of books to pass along at the end of this month. 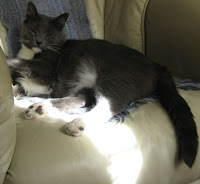 "The pressure of choosing names has exhausted me. I must rest now to regain my strength."
Posted by Bridget at 2:41 PM

Ooh! Thanks to both you and Jetsam!

And, thanks, too, for sharing your plant pictures. They look so nice and springlike!

Congrats to the winners - that's a very fun way to select names! Sadly, May would probably eat the paper faster than I could read it. :)

Hope the bloodwork comes back ok.

I must be having an inept day because I can't find the email/contact link. But... I did find your Rav name, so I'll send you a PM that way if that's okay...

Uh oh - I have no idea what happened to the e-mail link ... sorry about that! I've edited the message, if you re-read that paragraph.

The worst part - I can't even think of anyone else to blame!

The planter & the garden look so pretty.

There's always someone else to blame! I'd pick Blogger. Just because. ;)

Yeah, see my guys would either eat the paper, play with the paper, or lie on the paper. But they do like the Jet-Man's idea of lying on the sweet side of the couch.

Nice garden! Even though I only have a deck, I love planning my little deck garden this time of year. I might try herbs... What direction does your herb garden face?

The garden is lovely- I needed some inspiration.

Ohmygosh, that is the most hilarious prize-selection method I've ever seen! Thanks, Bridget and Jetsam! Jetsam's such a cutie. You can tell him I said so (with a little head rub, if you please). :)

How are your peatlets faring? Mine were just not up to snuff this year and I supplemented with a huge selection from Home Depot and Lowe's--peppers, tomatoes, dill, and parsley. I managed to peatlet radishes, scallions, some basil, tomatoes and, quite wonderfully, fennel! I have four sprouting now and I'm ever so excited. :)

Up next, mesclun. From seed. Insert dramatic music here...