Those of you who have been reading this blog for a while may remember this project:

That's the beginning of a Jaywalker sock, and I started it when we were on vacation in Virginia Beach in - wait for it - 2007! We went on vacation in September, and this was what I had completed when we returned home. Then I had wrist surgery in October 2007, and it got left in WIP-land. For longer than I had planned. But in early 2008, I started on my project to knit socks for Christmas gifts, and it got pushed aside. A few times I recall coming across it, and thinking, "Oh yeah, I really want to finish those, especially since they will be for me."

I picked them up again this summer, and thought there was some kind of mistake, so I ripped back for a bit. As I finished ripping, I realized that there hadn't been a mistake, I had been working on the heel flap the last time I had worked on them!

I was so annoyed with myself, that I put them down again. A couple of weeks ago, I decided that it was ridiculous to keep avoiding the project, so I picked it up again and got moving. By the end of this past weekend, I had this: 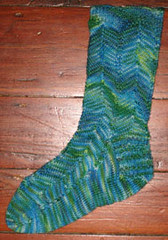 One year and 8 months later, I have a completed sock. Not a pair, mind you, just one ... le sigh.

I am, however, back into the swing of the pattern and the project, so I will be getting the second one underway this week. Though it turned out OK, sock #1 will be my "learning curve" sock, so to speak. It's a little bit wonky in places, where I had to rip out to fix something, or where I just wasn't certain what I was suppposed to be doing. I had started these socks before I'd ever tried any pattern besides my basic sock pattern, so almost everything about them was new to me. Between that and the long time between starting and finishing, I'm just pleased that sock #1 looks anything at all like it should!

I hope to have pictures soon of the blocked Silk Kerchief, I'm waiting until I can get The Tim to lend his photographic skills. (Jetsam offered his assistance in blocking it, the dear boy.) But in the meantime, I'm going to be busy with sock #2, which I am determined will be completed soon ...

*I cannot figure out how to make diacritical marks in Blogger. So sue me.

Oh. I have so made eejit boneheaded maneuvres like that. So. Many. Times.

Woo! 1 year and 8 months to finish a sock! You go Bridget!

We aren't worried about the marks --- we're all diving for the dictionary to see what "diacritical" means!

What a pretty sock. One of these days I'm going to continue learning to make socks. I have the leg and heel flap of my first sock done. I have dreams of actually finishing someday.

Pretty yarn! Does Jetsam like to lay on your drying blocked items? There's nothing like wet wool for enticing Riley - I usually have to block things in Stephen's room when he's not with us because it's the only place with a little floor space where I can close the door.

Ditto w/Kim on the diacritical definition. Ah! When you figure out how to put them on with the computer, let me know.

My Jaywalkers took me about as long, for about the same reasons. The first one? Eons. The second one I did in a week.

It's lovely. But, well, I've been reading so long I'm wondering what on earth happened to your Clapostis????