If you have read this blog for any amount of time, you know that I have a great-nephew, Zach.  He lives in Baltimore, so we actually get to see him more than just every few years (like my other great-nephew and great-nieces, who live in Arizona).  Zach is one of the best little kids I've ever met, and I'm not just saying that 'cause I'm related.  He is well-mannered, willing to go anywhere, and I have truly never heard him whine (one of the things that can make me stabby around little kids.  And adults, actually).

Last August, my nieces threw a party for my sister and brother-in-law to celebrate their fortieth wedding anniversary.  Zach chose his own outfit, and apparently when his mother told him he did a good job, he said (and I don't remember the exact quote, but this is the jist of it), "I'm fabulous."  What little kid uses the word "fabulous" in any context, much less in the proper one??

This past fall, I had stopped at Loop one day, wanting to see a yarn I had read about, but wasn't carried at Rosie's.  I saw someone knitting with this very unusual yarn, in a really vibrant colorway.  I asked about it, and learned that it was a yarn called Fabula, and was superwash.  Immediately, I thought - "Oh I could make a hat for Zach for his birthday with that yarn, and his mom would even be able to throw it in the washing machine!"  I had some Christmas knitting to do first, so I didn't buy the yarn just then.  However, once Christmas was over, I bought two balls and went in search of a pattern.

Quickest. Knit. Ever.  I started knitting when the playoff game between the Pittsburgh Steelers and then New York Jets began.  By the time the game was over, the hat was finished!

Once again, Barnsie the Barnes & Noble Bear was willing to model the finished hat, first by himself, then with his friend the Blue Calico Kitty: 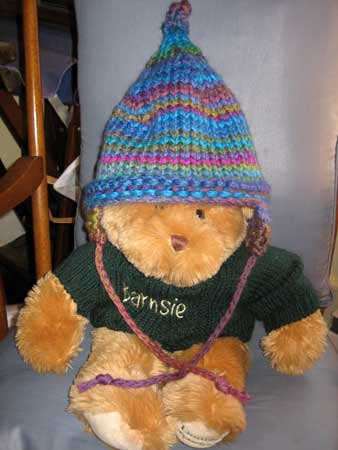 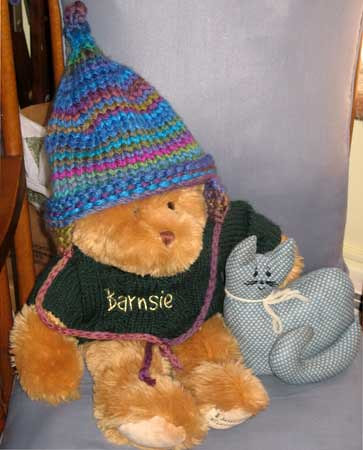 Project:  Fabulous Elf
Pattern:  Knitculture Elf Hat Pattern
Yarn:  Fabula, Colorway 93
Needles:  US 15 (oy!)
Comments:  Love this pattern!  The construction is great - you knit the earflaps, each on a double pointed needle; then, you knit them from that onto the circular needles as you cast on.  Brilliant!  The pattern was well-written, and the only change I made was to just make a big knot at the end of my long-tail cast-ons which formed the ties at the end of the earflaps.  The pattern calls for I-cord, but I liked the look of the ties as proportionally sized to the hat.
I put this in the mail to Zach, and he received it in time for his 5th birthday.  I know I've shown you this before, but this was the best part about knitting the whole thing:

The Fabulous Elf  himself gives it a thumbs-up!
Posted by Bridget at 8:35 AM

So cute! There really is nothing like a well-appreciated knit.

I have a son who has an amazing vocabulary as well. It gives one pause when those words pop out, doesn't it? The hat and the picture are crazy cute.

He is quite fabulous - but it's a special joy when a handknit is so well-liked.

That is one fabulous reaction to a fabulous hat knit for a fabulous kid. And I do not use the word lightly.

Fabulous indeed - both hat and nephew!

He is adorable! I'm sure he'd be a willing model for all future fabulous knits that you undertake. :)