Here's one for you:


What is orange and white and has three legs?
The answer:

Yep, here he is in all of his sweetness.  The name they gave him at the shelter was "Lego," (short for Legolas) but we're not sure we'll keep calling him that.  We are trying to think of better names (of course we tried that with GK as well, and you all know how that ended ...).
Anyway, he officially joined the family this past Monday.  I found out about him through my friend Kate (of Kelbourne Woolens and Vintage Modern Knits fame), who volunteers at the city animal shelter (I am too much of a wimp to be able to handle that kind of thing).  She took him home as a foster while he was recovering from his amputation surgery.  He showed up at the shelter with a badly mangled left back leg, which had to be removed.  Other than a slight infection that was treated, he recovered well enough to be adopted.  But, needless to say, a three-legged cat is not likely to be whisked out of the shelter.
The Cat Currently Known as Lego is a very happy boy, I have to say.  They think he's about a year old, so he is still very kitten-like.  And one thing I was worried about was all the steps in our house.  We live in an old Philadelphia rowhouse, and there are LOTS of steps.  Suffice it to say he dashes up and down with no problem.  (Actually, he does steps better than I do!)
Jetsam was puzzled at first - I think he couldn't figure out how another kitty turned up ... but they have found many things they have in common, like a good game of Kitty Tease:

They are also both good eaters (it's a family trait, what can I say?), and cuddle boys.  They are becoming better friends every day, and I think it is making Jetsam less lonely.  If you look closely at the picture above, you can see where the amputation was.  It's healing nicely, and it won't be long before the fur will grow back and it won't be as disturbing to see.
And talk about pretty markings, look at this shot: 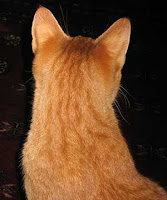 Isn't he a beautiful boy?

We are having a great time with him, and he seems to be enjoying himself immensely.  I'm so glad that we were able to adopt him.  The Tim suggested that we rename him Lucky, since he is lucky to still be here, and we're lucky to have him.  Not a bad suggestion, I guess.  We'll see what happens.  We've decided to give ourselves this week to either change his name or leave it the same.

No matter what his name is, he isn't going anywhere away from us!

Oh, congratulations, Bridget! I'm so happy you've added a new member to the family. Lego/Lucky/Name TBD looks like a dear.

WOOOOO, welcome, Lego! I think the name Lucky would be very fitting.

So many thanks! Have been waiting to see more pictures of the lovely lucky boy. How great for all three of you. I will have to email you pictures of my tripod cat, Tripper. That's the only thing about your new kitty I don't like, he reminds me of my old Tripper who I miss so much.

Love the new boy. Please keep us updated on his progress.

So nice to read more details about this beautiful cat. The photo of the back of his head is gorgeous. Please keep the news--and photos--coming.

He looks so sweet! He's so lucky to have you in his life (and I bet you feel the same)! Best wishes!

OMG, what a beautiful cat! Cats are smart, and he knows he is in a loving, caring home now. Good for you for giving him a home. You are good people.

I love him already.

He is very handsome and his sweet personality shines through.

I still think "Tripod" would be a great name....

What a beautiful boy! We had a handsome "yellow tabby" named Tigger when I was growing up...

I vote for a new name. Lego for a cat missing a leg seems a little... wrong. I think since he's a red-head and it's March, he'd like a solid Irish name.

Oh, how adorable. Congratulations to all! And you know we have an orange tabby, too, though he's a four-footer. I'm so glad to hear Lego-the-cat-who-may-be-renamed is moving around well on three paws. He is a lucky boy to have found you :)

Hey, how about Charlie? because his fur has such a nice Sheen.

WHAT a handsome lad!

ooooooh, my heart swells with happiness for you and Lego! such a wonderful forever home he's found.

He is adorable. I like Legolas, it has a nice regal tone to it while still being kind of a bad pun. Like calling a bald guy "Curly". A term of endearment.

There's no way I could work in an Animal Shelter or be an Animal Cop. People would die. My house would be filled with pets. Hez would be displeased.

OMG what a sweet baby!!! He's beautiful!!! And it seems as f Jetsam and him will be life long pals. The fact that Lego/Lucky is so young, he'll be able to adjust very easily to 3 legs. I like Lucky. or Chance.

I was wondering if you might decide to adopt another kitty, and I can see that you found the PERFECT one. We might be aware of his amputated leg, but I bet he's adapted just fine and doesn't give it a second thought. BLESS YOU for giving a sweetheart a chance at a wonderful life in a great home. The "special needs" pets somehow know this, and love you ten-fold for it.

And I'm partial to orange boys, so please give him a huge hug for me!! Welcome Lego/Lucky!!

Hands down you have to change his name to Lucky!!!! What a special boy ~ and he sure was lucky to land in your home and to have had the needed surgery too. Welcome to your new family member :)

He's beautiful and lucky. I would vote for keeping his name as Legolas. It seems so fitting with the sense of humor you and Tim so often show, just like Jetsom. Glad to know Jet is no longer an only kitty. Kitties need friends just like people do. Pat

What a beautiful kitty!

Lego is a great-looking kitty! He's a lucky boy, no matter what his name ends up being.

What a handsome little man you have there! Who needs four legs, anyway, right? He is so very lucky to have found you!