Well, it was back-to-reality-day today, the Monday after Thanksgiving.  I was lucky enough to have a four-day weekend; The Tim had only Thanksgiving itself, so we made sure (as always) to enjoy it as much as possible.

This year we had one of the most beautiful days weather-wise that I can ever remember.  Sunny, and cool but not cold.  Just perfect for the cozy holiday that I think Thanksgiving is.

In the mid-afternoon, we took a walk along the river trail.  There were other people out and about, but not so many that it was crowded.

Philadelphia has an awesome Mural Arts Program.  There are examples of their work in every part of the city, and I think it is one of the things the city has going for it over other places.  Next summer, there will be a new mural, right along the river trail:

It was such an enjoyable walk, in the sunshine, and so quiet compared to any usual day.  The sun was doing a rippling reflection on the Chestnut Street Bridge, which I wasn't quite able to catch with my digital camera and lame skills:

But you can kinda get the idea ...

We walked to where the path breaks away to go up to the Philadelphia Museum of Art:

We sat on a bench, watching the Schuylkill River go by for a few minutes, and then headed back home, 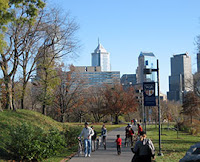 where we got serious about fixing dinner 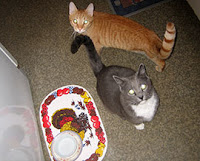 We all enjoyed our dinner, then cleaned up and had some tea and pumpkin pie later in the evening.  Another wonderful Thanksgiving day!

On Friday morning, The Tim had to be at work early.  I got up and decided to go shopping - for myself!  One of the nice things about being in Center City Philadelphia is that it doesn't get as crowded on Black Friday as the malls do ('cause you know, people would have to be outside - the horror!), and any crowds there are never seem to be in force until after lunchtime.  I left the house at 9:00, and was home by 11:00, having had some success.  The rest of the day I worked on some projects.  That evening, we had tickets to see "Billy Elliott" at the Academy of Music (one of The Tim's BD gifts).  It was wonderful, though at the performance we attended, Billy was played by an Asian boy, so it was somewhat disconcerting at times.  Saturday was spent watching a movie with The Tim before he left for work late in the afternoon, then I paid some bills and worked more on some of my projects.  Sunday, I was at Rosie's** in the afternoon, and then we just relaxed last night when I got home.  (The Tim got home earlier in the afternoon, so he was ahead of me on the relaxing part ...)  It truly felt like a nice, long, leisurely weekend.

I sincerely hope that you had a nice holiday as well, and were able to relax at least some of the time.

Oh, and those projects I mentioned?  Some were actual knitting - and I'll show them to you soon.

Hope the week goes well now for all of us!

**If you are in the area, please join us for our holiday project to help some other knitters.
Posted by Bridget at 5:44 PM

At the risk of sounding ridiculously racist: An Asian Billy? That IS disconcerting.

What a lovely, cozy post! The day looks and sounds beautiful. I especially enjoyed the aerial view of the hungry felines.

The kittehs look like they enjoyed the feast! I love you bringing me/us(me) on your sightseeing walk about town.

Nom nom nom...pumpkin pie... Is that placemat for their food dish decorated with a turkey?!!

Hope the work week back has been as leisurely.