Last year at this time, The Tim and I decided that the time was right to add another kitty to our family.  We missed Tess and the Garden Kitty, and even worse, Jetsam was incredibly lonely, having never been an only kitty.  But The Tim made a rule that we could only adopt a kitty "who really needed us."

My friend Kate, who besides a million other wonderful qualities, is not just an animal lover, but a volunteer at the city shelter, was fostering a cat who had recently had one of his legs amputated.  She told me about him, and said that yes, he REALLY needed us.  I suggested that she let me know when he was ready to be adopted and I'd see what I could do.

I think the deal was sealed when she posted this picture on Facebook. 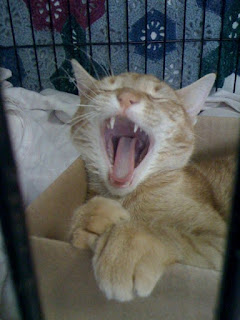 Because the next thing I knew, The Tim had made it his profile picture!  We made arrangements for the kitty - then known as Lego - to come for a weekend, to see how things went.  Would Jetsam think he was OK?  Would all the stairs in our house be a problem?  So many things to consider.

Well, as you know, the rest is history.  One year ago today, that kitty came for his "trial visit," and he just never left!  His name got changed to Pip, and he has been here now for a whole year.  During that year, we have learned:

That there are probably no amount of steps that would be too much for him;
He works on the assumption that everyone wants to meet him;
He is crazy;
He is so friendly, it's ridiculous;
He loves to cuddle;
He loves to play;
He adores Jetsam;
He is at home here, and no one can change his mind;
Unless they are willing to feed him 24 hours of every day.

Thinking about it now, adopting Pip was probably just as beneficial for us as it was for him.  The fact that he has three legs instead of four does not even enter into the equation for him - I'm not sure he even realizes it.  He dashes up and down the stairs, and climbs on the furniture at least twenty times a day with no problem.  And he is an incredibly good boy ... except when he isn't ...

In honor of Pip's one-year anniversary with us, I would ask all of you to give your family members - furry or otherwise - a big hug.  I think the Pipster would like to know that everyone was getting some love and attention today because of him. 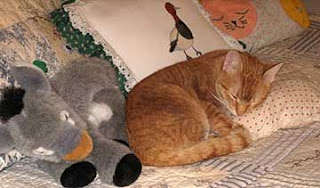 Happy anniversary, Pip, from Jeremiah, Posey, Corey, Rudi, and me!

Loving the photo extremes - big mouth to crashed out kitty.
So glad he's a happy boy and making your house a happier place too.

Oh, that The Tim! Such a pushover.

Congratulations to all of you! That's the way it is with pets for me. I worry so much before getting a new one (will we like it?, will it like us?, will the existing pets accept a new creature?) but then, before you know it, time has gone by and I can't imagine life without them!

Happy, happy to Pip, from Lila, Dashiell, and Bagheera. I'll be sure to give them all a hug when I get home.

Pip Pip Hooray!!! Sorry, I couldn't resist ;) It's often the "special needs" members of the family that we learn the most from and are the most inspired by. Pip is no exception ~

I cannot believe it's been a year! My favorite Pip story was the one about the hiccuping stroller.

I'm glad you all found each other.

Bridget- Kitty love and attention is always a priority around here.