... not that I'm ever a speed demon in anything I do.  Well, actually I am a fast reader - you know, one of those people who sit impatiently waiting while everyone else finishes reading directions at a normal pace?

As I've mentioned in the past few weeks, I've had a hard time concentrating on knitting and reading, because I've been so "busy" coughing and blowing my nose and feeling exhausted.  Now that I'm finally getting some of myself back, I can finally enjoy those things again.  And I even finished a knitting project that I started before Christmas, and that languished for weeks with just a little bit left to do.

A co-worker of mine, who is also just a great person, was thrust into the Interim Director job when the Evil Boss left at the end of last June.  Well, she has managed to not just hold things together, but make positive changes, and bring everyone together as a team.  She's done an amazing job, and though I know that she's had a lot of sleepless nights and worries, I - and my co-workers - all think that she has been good for the library and archives.  Her birthday is in November, and at the time, I thought I'd make her this item, but then realized that it would be unrealistic, given other things I had to do.  I didn't want to give it to her for Christmas, because I didn't want to create an awkward I-got/made-you-a-gift situation.  Then it was going to be a New Year's gift.  Well, guess what?  I'm wrapping it up to give her for Valentine's Day.

Here is a crappy photo - time, weather, and someone to help me photograph it just wasn't happening; but trust me, it looks a whole lot better than this in real life! 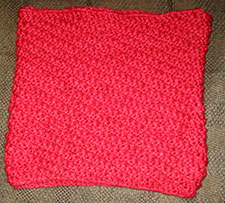 It's very cushy, and I think she will like it.  I know that red is her favorite color, and she spends a lot of times outdoors, both with her daily commute, and on the weekends, so I know she'll be able to use it.

Pattern:  The Climb and Swirl Cowl
Yarn:  Lorna's Laces Shepherd Bulky, colorway Cranberry
Needles:  US size 7
Modifications:  Nothing major, but it ended up a few inches shorter than the pattern, because I knit until I ran out of yarn.  It's still a nice size to cover the neck and the lower part of your face if you want/need it to do that.

I can highly recommend this pattern as well as this yarn.  I enjoyed knitting this a lot, and hope the recipient will be happy with it.

I'm hoping to have another finished [belated] gift to show you soon.  I started a pair of Dashing mitts for The Tim for Christmas.  However, starting in the middle of the afternoon on Christmas Eve does not allow for finishing them in time for the next morning (well, at least not for me).  But I finished the first one right before I got sick, and the second one is well underway.

I was originally a little dismayed that my first two FOs for 2012 would be things I'd hoped would be the last FOs of 2011, but since it doesn't really matter in the grand scheme of things, I'm over it.  Life's too short and all that.

Cowls are wonderful gifts - they're small enough not to be intimidating for knitter or receiver, and they are like little cuddles...

That's the perfect Valentine's Day gift ~ and she'll never know it was meant for New Years - LOL My Mom told me when I was starting my career that a boss could either make life a pleasure or miserable for their employees (probably knowing I'm not the most patient of people) and I've never forgotten that. I'm glad your evil boss is a thing of the past!

Like you I can't concentrate for toffee these days. I'm hoping this Spring life will return to normal ~

Lovely -
I've become obsessed with cowls lately and several came off my needles as gifts and for the emergency gift stash.