The Fastest Route from A to B

... is not a straight line, at least if it's something I'm doing.

Tomorrow evening will be the fourth session of my five-session Beginning Quilting class at Spool.  You may recall that I was signed up and ready to go earlier this year, and then whined to all of you when I had to cancel out of the class due to the return of stupid pneumonia.

Fortunately, Laura - the owner of Spool - said that I could just be in the next session of the class, so this time around, I finally got to see what quilting was all about.  I'd been curious for a while, but kept telling myself that I didn't need another hobby.  Each time I'd see the class schedule though, I'd think "Hmm, maybe I should try it."  Finally, I just thought I would do it.  I figured that there could be three possible outcomes:  a) it would not appeal to me at all, and I'd have it out of my system; b) I'd love it, and want to make at least a couple of other quilts; or, c) I would like it well enough, but not care if I ever went any further with it.

Part of my hesitation is that I am simply not able to draw, cut, follow, or line up a straight line.  I see it as straight, but once I've "done" it (drawn, cut), it's obvious even to me that it is not straight.  Since I know this about myself, I don't mind.  But I've taken classes for things that ideally use straight lines, and even if I'm fine with my work, the instructor can't deal with me.  (I took a bookbinding class once and the instructor developed an ulcer ...)

Our instructor, Ashley, is not that way at all.  She keeps telling us that quilting should be fun, and not to overthink it.  When one person in the class was freaking out because she didn't have the correct number of strips in one of her fabrics, Ashley just told her not to worry, and use another one of her fabrics instead.  It was nice to hear a class instructor say something like that.

We've also had homework for most of the weeks, and this week we were to cut  and sew the inner and outer borders onto our quilt tops.  At the end of last week's class, we were all holding up our completed squares sewn together, and one woman in the class said to me, "That looks like something a blind person made!"  (Everyone else had very classic, coordinating blocks.) 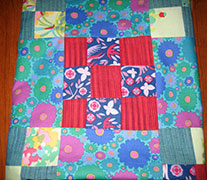 I responded, "My husband is blind."  Which as I've said when I have told people this story, was not the right thing, but it did shut the woman up.  (The instructor was out of the room at the time, or I'm sure she would have said something.)

In any event, I cut and sewed my borders onto my squares, and I'm very happy with how it is looking: 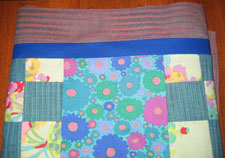 Ashley has said that tomorrow night, we'll do the actual quilting, and then next week will be backing and bindings.  I've really been enjoying the class, and when I showed this to The Tim yesterday, he said, "I know you will take this the way I mean it, but I can't believe that you made that!"  (For the record, I knew what he meant - I couldn't believe it myself.)

So the last two classes will tell how much of a quilter I will or will not become. At a minimum, now I know what is involved, and the various steps that must be followed.

And that - at least in my case - straight lines are vastly overrated.
Posted by Bridget at 7:16 PM
Labels: quilting-class, straight-lines

wow. that was INCREDIBLY rude!!!! I think your squares are very cheerful and happy and have an artistic quality to them. Apparently she hasnt seen many quilt magazines because there are many types of quilts out there. I dont like the quilt police......

I'd have said something along the lines of "yeah well you look like you a blind person dressed you" or something equally 5th-grader like. Nasty! Well, I think it looks fantastic! Yay Bridget!

I come from a line of quilters, and, though I never took to piecing, I adore cutting out the shapes. My mother would always make the templates out of sandpaper, and I would cut until I had blisters.

Quilting is addictive but it's like anything else, learning curve!