What better time to show a completed gift from 2011??

As you may recall, The Tim had asked me to make him a pair of fingerless gloves, after seeing all of the Fetchings I made for my nieces for Christmas.  I decided I would give it a try, using the Dashing pattern, designed by the same person.  Of course, I decided all of this on Christmas Eve ...

But even though I knew there was absolutely no way that I would have them finished the next day, hope springs eternal, and I was certain I'd have them by January 6 - the last day of Christmas.  Not. Even. Close.  Oh well, by that time I had one finished, so surely it wouldn't take long to get the other one knit.

Except that I got pneumonia.  I was so out of it, there is just no way I would have been able to knit at all, much less pay attention to any pattern.  So ... they were finally finished, by the third week of February.  Better late then never.

Of course, since we have had a non-winter winter, it meant that his hands weren't freezing most of the time anyway, and that is the only good thing about this winter, as far as I'm concerned!  In the end, he really likes them, and has gotten some use out of them on chilly mornings.

If you look closely, you can see the cable in the pattern: 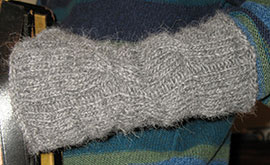 The yarn is kinda fuzzy, so the cable is hard to see in these pictures. 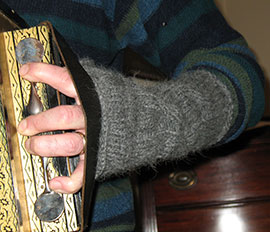 Pattern:  Dashing, by Cheryl Niamath
Yarn:  Classic Elite Montera, Gray
Needles: US size 7
Modifications:  I made them shorter than the pattern called for, since the way they were going, they were plenty long and I was running out of yarn!  If I knit these again, I would probably not use such a fuzzy yarn, since the cable is really hard to see, even in person.  But overall, I'm happy with them, and he likes them, so it's all good.   :-)

Oh - and yes, that's an accordion in the picture.  We have three of them, as well as one concertina. 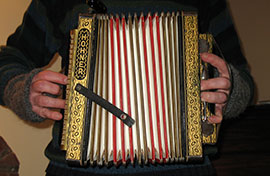 One of the accordions was purchased on a trip to Canada.  But that's a whole 'nother story ...
Posted by Bridget at 7:06 PM
Labels: accordions, fingerless-mitts, knitted-gifts, The-Tim

The may be too fuzzy for the cable to show up, but those mitts look deliciously cozy!

My mother made me learn the accordion when I wanted piano lessons. I have a very tortured relationship with the instrument and only like hearing them in La Vie en Rose.

No one I've ever known has delivered the word that they owned 3 accordions. Plus a concertina.

Aw. He wanted warm mittens like everyone else got :) They came out great ~ you gotta love those classic patterns!