June is bustin' out all over!
The sheep aren't sleepin' anymore!
All the rams that chase the ewe-sheep
All determined there'll be new sheep
and the ewe sheep aren't even keepin' score!

-- from "Carousel" by Rodgers and Hammerstein


The Tim and I have a collection of musical soundtracks, and this is one of them - I particularly like this part of the song, 'cause of the wordplay about sheep! It's funny, because whenever I hear this song, I can "picture" June in my head.


So what does that mean?  Well, in theory, to me, it means a chance to get started on things for the summer before it becomes unbearable.  We've been fortunate so far (yeah, a whole week and half into it) that we've had actual June weather - warm (not hot) days, cool nights where you want the window open, but it's cool enough for a lightweight cover.  If summer was like this for most of the time, it would not be one of my nemeses.


What else?  Well, the past two Sundays, it has meant working to clean up our garden.  Which is not a garden in the usual sense.   We live in a Philadelphia rowhouse.  At some point, whoever owned our house purchased the lots next to it, tore down any other houses, and created a carport and walled-in area next to the house.  When we moved in, those were huge selling points for us, and for quite a few years, we did a decent job of keeping things growing and looking nice.  When the garden was created, it was two side-by-side bricked in areas, with flower beds and trees planted in dirt next to them.  Truly lovely.

Then, for about four summers in a row, we couldn't sit out in the garden, because of things like road construction, house renovations across the street, and gas/electric/water line replacement.  These things meant concrete dust, noise, tar smells - well, you see what I mean.  Basically, we just neglected it. Which is wrong, but not being a summertime person, the added ick factors made it even less likely that I was going to make any effort to at least do basic maintenance.

Well, this year I decided that I was going to reclaim the garden!  Which of course was immediately followed by:  rain nearly every weekend, a foot brace, and a hand brace. But last weekend, the weather was beautiful, and I decided that for the amount of time I'd work in the garden, I could skip the hand brace.

Two hours later, I had one teeny section cleaned out pretty well.  And two large trash bags filled with leaves, branches, gunk, and burrs from the trees.  It wasn't perfect, but it looked a lot better.  I was pretty pleased with myself.

Today, it's a LOT warmer, but I got an early start, and made progress on another teeny area.  Originally, I thought I'd be able to plant some flowers, and that maybe by the middle to the end of summer, we'd be able to sit out there and enjoy it again.  However, I have now adjusted that "schedule" - I'll plant things next summer, and hopefully we can sit outside and enjoy it this fall.  Because there is SO MUCH MORE to do even to get it to a manageable level than I thought.

As a result, I have learned:

1.  I have no ability to estimate the time it takes to accomplish things when working with nature;
2.  That - like so many things in life - you need to keep up with something to keep it nice;
3.  I enjoy having the amount of outside work to do that I have.  If I had a big yard, I'd be miserable;
4.  Things are at least in good enough shape that I can resurrect the bird feeder;
5.  I am grateful that the garden is walled-in, so I do not have to discuss everything with the neighbors as I'm working on it;
6.  That a shower feels incredibly good when you are covered in dirt, leaves, and God knows what else.

It's also enjoyable to have the animals out there to "snooper-vise" and not have to worry about them, since we are all within easy distance of each other, and they can't get out unless I open the carport door.

OK, so it's not as fun to me as reading a book or doing some knitting.  But if I can fix it up, it's a wonderful place to be able to do both.  And especially in the city, having this private outdoor is well worth the work. 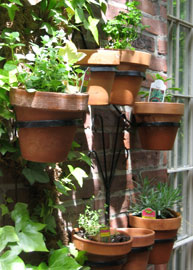 I have a brown thumb, so I'm not very good with plants, but I'm thinking of trying some container gardening when I retire in a couple of years. And I'm with you on the hot weather. I was born and raised in the south but I still hate it when it gets above 85 or so. Happy gardening!

Oh, I stopped keeping score with Nature a LONG time ago. It had gotten embarrassing.

I LOVE that plant holder in your pic!!! VERY nice. I might need to find something like that. That is if I can find something to keep alive. today it was 105 heat index. While we've been getting some rain, some of my plants just cant seem to handle the mid afternoon heat. Neither can I!