Well, last week was a really busy one, but in a good way.  I love Thanksgiving, so getting ready for it was just fine with me, even if there was a lot of running around involved.  We ate too much, relaxed, and then ate more.  It was nice and chilly, but also sunny, so it felt like it was actually November.  As of today, all of the leftovers are gone, and I took down our Thanksgiving decorations today and put them away for next year.  Another successful holiday, which leads into Christmastime, so it's win-win as far as I'm concerned.

I have still not been able to get a decent picture of The Tim's Turn a Square hat that I knit him for his birthday, but he has been getting a lot of wear out of it.  Hopefully I can get a picture this weekend, outside.  By the time I get home from work in the evenings, it's already dark, and my indoor pictures of it have been crappy to say the least.  Of course, he then gave me his original Turn a Square and asked if I could fix it - it's about 30% unraveled, mostly because he pulls it on with a ginormous tug when he wears it.  I asked him why he didn't give it to me sooner, and he said, "Well, I figured it wasn't that bad."  I'll see if I have some yarn that will work with it - I know I don't have any more of the original yarn.  I guess it just proves that he really likes the hat!

The only real surprise last week was the day before Thanksgiving, when I went to brush my teeth before leaving for work, and found out that our bathroom sink was clogged.  Of course it would happen the day before a holiday, right? 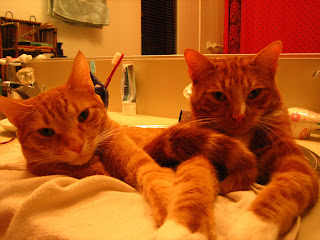 Fortunately, the clog was easily removed and I wasn't late for work ...

I also realized that I had a picture I'd meant to share with you at Halloween time, and kept forgetting.  My niece in San Francisco sent me this picture of Parker in his Halloween costume: 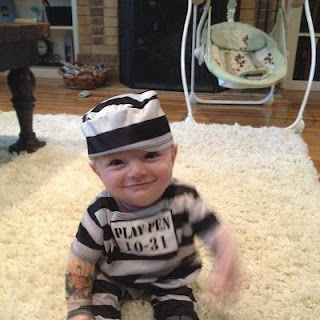 This picture just cracks me up!  I especially like his fake tattoo on his arm.  I showed it to a couple of people I work with, and my boss actually printed out her own copy and framed it, because she said she wanted something to make her happy every time she saw it.  Apparently, Parker loves to get his picture taken, and when he sees a camera, starts to smile.  But this particular picture just really gets me every time I see it ...

Until next time, I hope any clogged sinks you may have are as easy to fix as mine was, and that you have something to make you smile and laugh every day.  Happy last week of November!
Posted by Bridget at 5:13 AM
Labels: babies, gifts, knitted-gifts, knitting, koodle, Milo, pets, Pip

So cute! I also love that fake tattoo!

That picture is a hoot. Kids crack me up.

Adorable photos all around! The tattoo is a hoot, and I love the "clog". Can't wait to see The Tim's hat.

That costume is so cute! (and Parker).

Was that the clog in your sink? Adorable.

OH clogged sinks do always happen before a party.

ILOVE Parker the Jailbird....his tattoo is too much!