You Might Want to Sit Down for This One ...

Because in this post, I am actually going to show you that this blog is not just a "pretend" knitting blog - yep, I've got something to show you!  And, wonder of wonders, there are others to come!

So if you are still with me, let me show you my last FO of 2012.  This was finished on November 11, but various photo sessions did not work out, so rather than show you The Tim wearing this hat that was knitted for him, it was time to rely on the old medicine ball ...

A few years back, I knitted a Turn a Square hat for The Tim for Christmas.  It was a big hit, and was the first time I had knit something with stripes.  At the time, I had no idea what the Jogless Stripe method was, so if you looked closely, you could see where one color changed to another.  Neither of us cared, and to some extent, neither of us still do.  (*Note:  Rather than link to a specific version of the Jogless Stripe demo, I'll leave it to you to choose from the many available if you just Google the term.)

Anyway, The Tim mentioned really liking the hat, and when I found myself with a) some yarn that didn't cry out to be anything else, and b) in need of a birthday gift, I thought I'd go ahead and knit another.  This time, though, I decided to give the Jogless Stripe method a try, and I must admit it does look nicer when the item is finished. 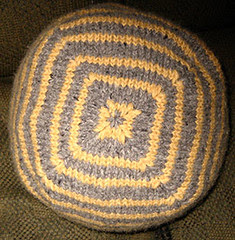 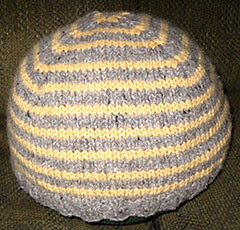 The side/front/whatever you want to call it

Project:  Turn a Square Squared
Pattern:  Turn A Square by Jared Flood
Needles:  US size 5 and 7
Yarns:  Brooklyn Tweed SHELTER (gray) and Classic Elite Inca Alpaca (yellow)
Modifications:  None
Comments:  If you haven't  made one of these, you really should.  The pattern is free, you don't need a lot of yarn of either color, and it goes really quickly.  Plus, it's well received.  The Tim started wearing this one, and gave me his original one to repair, as it had become unraveled!  I asked him why he didn't give it to me to repair sooner, and he said, "Because I just like wearing it too much."

And to "officially"close out 2012 (now that it's April!), here is a shot of all of the projects completed last year: 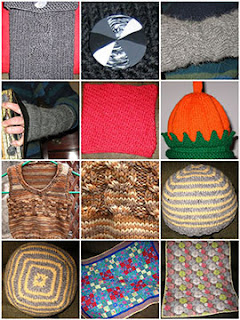 Not a lot, and not necessarily world-shattering, but a) I'm happy with it, and b) it's not a contest!

And now that we have closed out the last year, we can move on to things completed so far in 2013 ...

Bridget- I saw The Tim's hat on Ravelry so I can vouch for the fact that it's real.