Before I go any further, I want to let you know that this is not one of my usual blog posts.  Things that have happened this week have made me want to write this.  It is strictly my own opinion, and you are not in any way expected or required to agree.  So feel free to stop reading, because I would rather that than upsetting or deeply offending anyone.

First - the whole thing with the vote to increase background checks for gun owners.  I don't understand why this would be a problem.  If you are a "good guy" what do you have to hide in a background check?  I have had to have them in order to be considered for various jobs over the years, and though I always hope I don't become famous or run for office - because like most people there are things in my past that I am embarrassed by and/or ashamed of - I know that I have nothing to really worry about, or that I don't need to worry that any "secrets" will be found.  And though I am not someone in favor of hunting unless it is literally the only way you can survive, I cannot see the reason that any hunter needs an assault weapon.   And as for the argument that "guns don't kill people, people kill people," a) give me a break, and b) guns aren't made to be benign.  Unlike a knife that can be used to cut things, or a rope that can hold something together/pull things, a gun exists to be shot.

This particular image sums it up for  me. 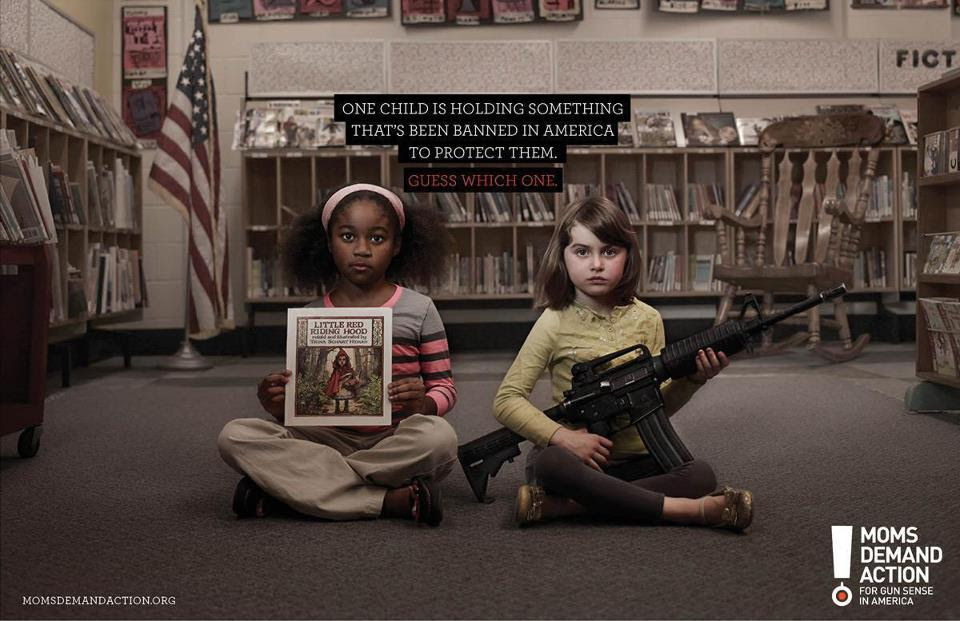 Second - the deadly explosions at the Boston Marathon.  This is truly horrible, no matter what your "theories" are.  But I not only hate that these things happen in the first place, I hate the immediate blaming and fake patriotism that immediately occurs.  I am not in any way discounting the fact that what happened was wrong, evil, and that the victims were innocent.  I want the perpetrators to be caught and to face the consequences.  What really bothers me is the sort of vigilante mentality that takes over.  Usually from people who are condemning said mentality in all other situations.  Sadly, there are parts of the world where such things happen several times a day.  It is no less horrible and sad there, and the victims are no less innocent. It's like people on the news who say, "We never thought that kind of thing could happen HERE."  There are no 100% safe places, and regardless what anyone would like to think, there never have been.

Third - the explosion at the fertilizer factory in Texas.  An entire town pretty much wiped out.  The victims guilty only of their choice of where they lived.  And yet - it's barely a mention in news stories, or on news sites.  Devastation is devastation, and none of the victims in that explosion are any less important than any person who was at the Boston Marathon.

And finally - if you are even still reading - I would like to share something that my mother told me the morning after my father died, when I was 13 years old.  We got up that morning, and I wondered what we should do.  My mother reminded me that even though our world had been turned upside down, for most other people in the world, it was just a regular day.  And for some people, it was actually one of the best days of their lives.  Babies would be born.  Someone might get a job they wanted.  Maybe people were getting married, or engaged.  An acceptance letter to a desired school might be in the mail that day.  Or someone might just wake up and think that it felt like a good day.  She told me that there was nothing wrong with being happy, even when other people were sad, and that no one should feel guilty because of it.

At the time, this seemed like a revelation, though of course it was proven true when I looked around me.  And I am sharing that with you now, because I think it is important to remember, on any given day.  I truly believe that it's possible to be 100% empathetic, and still be a relatively happy person.  If not, why would any of us get up in the morning at all?

Thus endeth my rant-filled post.  As I said in the beginning, I did not write this to accuse anyone of anything, or to go out of my way to offend anyone.  But I've gone through the entire week wanting to say it, and I appreciate that I can.

Have a good weekend.  Remember to do something for those that need your help, and be grateful for what you can.  And always remember that for the most part, the world is filled with good and caring people.  Who are not Pollyannas.  And who get up every single day hoping for a good outcome.
Posted by Bridget at 8:16 PM
Labels: my-opinions

Ah Bridget, if we lived closer I feel we would be fast friends. I agree with you on every measure. I have to have a background check to do my work, I have been fingerprinted and my background extensively researched. Yet I could own some whacked out gun with hundreds of round of ammo and no one would know. So sad I think. Your Mother is so wise, that was the perfect thing to tell you after such tragedy and it is the perfect thing to think about right not. As for our government, we should each take the time to write our Representative and discuss our discuss our displeasure with their vote. They are all more concerned about the money they get from the NRA, not about the well beings of their constituents.
Hugs to you,
Meredith

First of all, I'm sorry you lost your dad when you are 13. Second, your mom rocks!!! She is spot on.

What a remarkable thing for your mother to have said to you. And for you to remember.

I agree completely! And like Mereknits, I had to have a background check and be fingerprinted for my job. Do I mind? Heck. No. If it helps to protect the kids where I work from people who want to hurt them, then I'll do it happily. I may grump about the neccessity of it, but I'll still do it.

Absolutely! or as we say down here, "Damn straight!" Excellent post and you use some phrases I plan to adopt to better state my case when I feel the need to voice an opinion. When confronted with belligerent people, I tend to forget everything I need to say (it's that southern, 1950s training that women and children should be seen and not heard; I have to get over that). Thanks for the post.

You lost your Dad at 13? That is so sad!! I miss my Dad now and I had him decades longer.

Yeah, I don't get why background checks are such a big deal either. They actually require them for some sales so why not all of them? Particularly gun shows, which somewhat blows my mind. I also don't see what the big deal is about registering guns and requiring tf of ownership papers - which almost went through except families were exempted. Say what? Why? Someone told me it would have a registry of gun owners that the presumed "THEY" could access but I'm fairly certain that "they" could do the same thing through permits.

Well said. Although I don't think Wayne LaPierre will be reading your blog anymore.

What a wonderful lesson your mother taught you. When my father died, when I was 16, I turned to my Laura Nyro music for comfort. A relative told me it was in appropriate. It was a cultural thing, but has stayed with me as a sad memory.

I know, I am just so sick of the right-wing nut-jobs who feel that it is their SOLE duty to protect the rest of America by preserving "The American Way." You know, if the American is never leaving the house without a gun and not trusting even your closest friends, I would rather be a Canadian.

And I am also sick of trying to argue FOR gun control without offending anybody. You know, maybe people need to be offended.

Your mother was a very wise woman, and totally right by the way, but you know that, I'm sure.

What a post! Fantastic. Yes, it is our duty to find happiness . THe MOnks OF New Skete wrote a serious book on the topic.

I Love your mothers words of wisdom an dI too am very sorry you lost your father so young.