The Feast of Stephen ...

Hello and Happy St. Stephen's Day, or Boxing Day, or day after Christmas, or whatever you choose to call it.  We had a wonderful Christmas Day, which I shall go on and on about regale you with in another post, but I wanted to show you something from today.

After several years of having a hefty supply of Christmas cards, and not needing to buy any for the next year, this year we used up everything.  There is a store near our house called Papyrus that has truly lovely cards and wrapping paper, which usually has prices to match.  But of course, after Christmas, they are marked 50% off, making them affordable.  And they disappear really quickly.  So since I was off today, I decided I would walk over and get some cards.  I found some really nice ones, but I also found these: 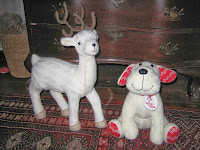 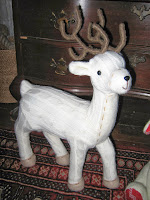 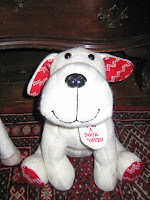 Due to my inability to take detailed photos, you can't really see the detail that meant I *had* to buy them - they are knit, and in a cable pattern!  And since they were on sale, I got both of them for the price of one (which is also why I wasn't able to leave one of them behind ...)

I named them Rudy (the pup) and Reiny (the reindeer).  They seem pretty pleased to be here, and have been getting lots of kitty rubs, as well as being sniffed but left alone buy Dug.


*****
On an unrelated note, today would be my parents' 72nd wedding anniversary.  They got married on this date because my dad was in the Army, and being sent to El Paso, Texas.  At the time, you couldn't get married during Advent in the Catholic Church, so December 26th was the soonest after it was over that a wedding could happen.  Please join The Tim and I in raising a glass to them tonight.

That's it for now, but I'll post again soon about our Christmas Day festivities.  I hope yours was as wonderful as ours was!
Posted by Bridget at 7:13 PM
Labels: Christmastime, knitting, Mom-and-Dad

Happy St. Stephen's Day to you! My family laughs at my inability to leave lone animals behind, so I'm glad that both Rudy and Reiny have found a good home with you. I'm looking forward to hearing about your lovely Christmas Day!

Of course you couldn't leave them behind. They're very cute. And cheers to your parents and the memory of their special day.

Do you the rationale behind the no-Advent weddings rule?

The pup and the reindeer are adorable. I'm not sure I could have passed the up either.

Congratulations to your parents! I raise my glass to them and wish them many more years together.

The stuffies are adorable!

I love that store, we have one in the mall and you are right it is pricey, but also very fun. Love our new little bargains.
Hugs,
Meredith

You got some great bargains there.

Such cute "finds"! Good on you!

Papyrus is an awesome brand -- I've never visited the store (and believe that is probably a good thing). I love Boxing Day (under any name), although I usually just stay put and rest up after the merry-making.

Cheers to memories and special love.