Eventually, I get around to things.  A couple of posts ago, I told you about receiving yarn for a pair of socks, and promised an FO post for them.  This is the promised post, and it is extremely overdue, as the socks are my last FO of 2014! 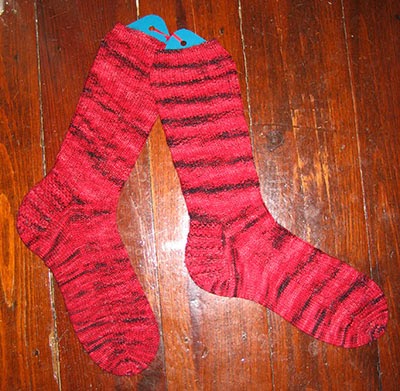 Back in August, when I opened up the package containing this yarn, The Tim said, "That yarn would make great socks for me."  I am pretty sure I gave him a dirty look, but I do remember saying, "Well, I'm not sure this is sock yarn," to which he replied, "You told me that pretty much any yarn can be sock yarn if you want it to be."  Great.  Once out of a bazillion times, he actually listens to what I say!

Anyway, fast forward to October 2014.  Our anniversary was at the end of the month, and The Tim is a hard person to buy a gift for, because if he likes/wants something, he'll generally just go ahead and get it.  Which is nice for him, but leaves me racking my brain for ideas.  So I decided that I would go ahead and use the yarn to make socks.  I had a whole month, no big deal.

Except that at the same time, I decided to make a pair of Halloween socks for myself.  Still, it all seemed quite doable.  And I got started on both of them and was happily knitting along.

Then life and work intervened.  After a couple of weeks, I realized that it was likely that neither pair would be even close to finished before the end of October.  So I put the Halloween socks aside, and decided to concentrate on the Kidney Socks, because The Tim's birthday is in November.

Then they became a Christmas gift, since it was clear they weren't gonna be finished by his birthday.  I zipped along, and then just  near the end of the second sock, my osteoarthritis started acting up.  So I had to take about a week off from knitting, though I could do other holiday things, so it was fine that way.

Well, the good news is, the socks were completed.  Yep, at approximately 7:45 a.m. on Christmas morning, I finished grafting the toe of the second sock, wove in all of the ends, and popped them into a gift bad I had waiting.

They were a big hit, but when The Tim expressed surprise about receiving them, I mentioned his comment when I opened the yarn.  He of course didn't remember anything ... 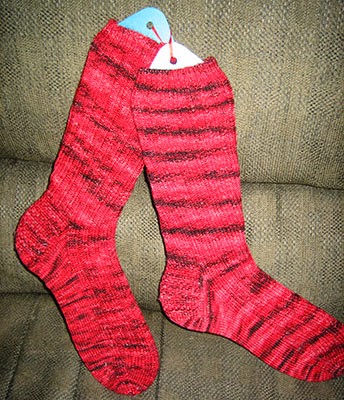 Project:  Kidney Socks
Pattern:  Classic Socks for the Family, by Melinda Goodfellow (my go-to basic sock pattern)
Yarn:  Verdant Gryphon Eidos, colorway The Kidney Heist
Needles:  Size 1 1/2US
Modifications:  Not anything major, I just decided to make the leg longer than the pattern indicates.  I always feel that regular socks that are not knee socks are lower on the leg than I would prefer.  So I added an inch and a half.  The Tim reports they are comfortable, and that he likes the length.  I love the way they turned out, and the yarn was just wonderful to knit.

I'm glad that we both like them, because it was ridiculous how long it took me to make them!  I was determined by December though, that one way or another, they would be a Christmas gift for 2014.  Phew!
Posted by Bridget at 4:20 AM
Labels: 2014-knitting, arthritis, Christmastime, fos, knitted-gifts, socks

Such lovely socks! (It always takes me forever to knit a pair of plain, old socks! I don't know what it is about them, but I seem to go into a time warp when I start to knit socks.)

It is clear that what Tim wants, Tim gets. His Christmas socks look great. Congrats on the handsome finish!

There's something about man-feet that just drags a knit on! The socks I'm working on for Dave were suppose to be for Valentines... and now his birthday... which is in July!

I just can't do socks. Can't. Some sort of mental block I guess. Those are lovely though.

I love the Tim socks. Lucky dude. I still have some socks hibernating from summer so as far as I'm concerned, you turned this pair around in blaze of glory. ha!

By the way, I'm convinced my husband as well suffers from a case of selective memory for all wife conversations. Yay Socks!

Love 'em! And I'm sure he is very deserving, even if he doesn't remember asking for them.