Ugh.  Day 1 of colonoscopy prep.  I have to prep for two days, since apparently I have an abnormally long colon.  When I did this the last time, it took 5 separate tries before it was completed, and that was after a 3-day prep.  A new doctor told me that the prep has improved, and two days should be just fine.  Sigh.  So let's hope *that*  moves right along, if you know what I mean ...

But, on to more pleasant topics.  After my success with Rechargeable, I was ready to move right along and cast on something new.  As is often the case, socks were my first thought.  I pulled out a skein of Meow Collection Yarn, in the Orange  Tabby colorway, and set it on top of the tall cubbyhole piece of furniture that holds my yarn.  I wanted to decide if I was going to knit regular socks, or some actual pattern.

But at least for now, I'm not knitting socks.  Because the morning after I set out the skein of yarn, it looked like this. 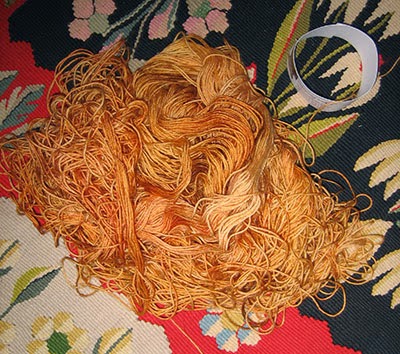 Sigh again.  I did not have the fortitude to even begin to try and untangle this mess, so I set it aside and moved on.  But it took me a few days to decide.  Then I remembered a project I had been wanting to make for a long time, and pulled out the yarn (fortunately already wound), and printed the pattern.  We were heading to Brooklyn to visit my niece, her husband, their baby, and their pup.  So I chose a project bag, got all of the notions together, and decided it would be my travel work.

I've really been enjoying it, and though I am using size 3 needles, it's going more quickly than I expected.  Here's an in-progress picture for you. 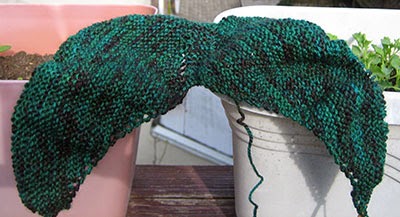 I know, it looks weird.  But this is the beginning of the Multnomah Shawl, which I have wanted to make for years.  Then at Maryland Sheep and Wool in 2012 (I think it was that year), I visited the Fiber Optics Yarn booth, and they had one knitted in this yarn, which is their Foot Notes yarn, colorway Blackbird Batik.  I was so taken with the sample, I HAD to get the same yarn to make it!

It's really lovely, and I am enjoying this knit very much.  Yes, I have some other projects that are currently languishing, but I want to keep my mojo going with things that are working well, so this will probably be my primary project, at least for the near future.

And ... maybe one day I can get to the Orange Tabby yarn ...
Posted by Bridget at 6:50 PM
Labels: fiber-optic-yarns, meow-collection, shawls, socks, wips

Bridget- Ah yes, the colonoscopy. I know it well.

I have alot of Fiber Optics spinning fiber, and it's so beautifully intense.

Colonoscopy prep--no fun at all.

Meow Yarn? Great fun; and so is the Woof Yarn! I got a hank of the Flame Point Siamese, but I'm going to get more Meow & Woof yarns.

I've come down in the morning to skeins that look like that....

Oh the Multnomah is lovely. I've always wanted to do one as well. I love the color you are using and can see why you chose it. I recently purchased yarn in the same color as a shawl pattern I was perusing. I was grateful really for not needing to try and figure out complimentary colors. I am not so good with that.

Your orange tabby yarn made me sad. I've been there.

But you're good with your mojo and multnomah! Enjoy your travels, family and your knitting!

I've had the Multnomah in my queue forever! Can't wait to see yours -- maybe it will inspire me to cast on, too!

I hope your colonoscopy went well. I still haven't done my first one so I'm in awe of you brave people.

Cats and yarn...what can I say. Not a good combination!

I tried Multnomah years ago and couldn't get the yo's to line up. I should try it again to see if my skills have improved! Yours looks lovely.