I stayed home from work today.  When I got up this a.m., I was extremely dizzy and felt awful.  So I went back to bed for a few hours.  When I got up, the dizziness was nearly gone, but I still felt crappy.  So I decided to fix a cup of tea and watch some of the "Today Show," then I took a shower, which helped.  I decided I felt good enough to knit a bit, and decided to return to my Custom Fit sweater.

I can't remember how much, if anything, I've said here about that.  Last October, I took a class at Loop to knit a sweater using Amy Herzog's Custom Fit system.  I think it's brilliant, and the few people I knew at that time who had tried it were absolutely in love with the results.  Since my sweater knitting takes place mostly in my head, I decided to try it.

I got started on my sweater, and was zipping along on the back, and then the holidays arrived.  So I put it all aside, figuring I'd pick it up again afterwards.  I did, a couple of times, but would always put it aside for something "shiny" ... I think since I've never had a sweater really turn out well, I was subconsciously avoiding it.  But you know what?  I LOVE sweaters, and want to knit them!  So today I picked it up, and was embarrassed to notice how little was left to do before the back would be finished.  I mean, it took about 45 minutes, and then I had one piece of it to show: 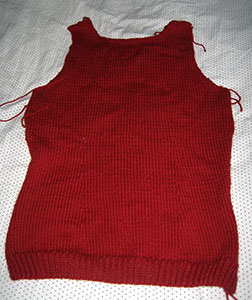 Not the best photo, but it is the one that shows the color most truly. And it looks rather blobby, since it's unblocked, but it's KNITTING, people!!!!

I've told myself that I really want to finish it no later than October (and hopefully before), so that I can wear it when cooler weather is here, and so I can actually have it on my person a year later.  (I know, that's just sad.  But what are you gonna do?)

I have to say that it improved the day greatly, and made me feel like I got at least one thing accomplished.  Right now (early evening), I am feeling a lot better, with just the tail end of a headache, and a little tiredness hanging on, but thankfully, I don't think I'm getting really sick.  Phew!

In other news, I hope those of you who - like me - are lucky enough to be one of the few, the chosen, (dare I say the brilliant??!!), have been celebrating today.

And before you go, let me suggest that you join us over at Kim's blog for the annual Knitters' Hunk and Knitters' Chick contest, which is now underway.  It just started the other day, so you have not missed a lot.  It's so much fun, and often the comments are as much fun to read as voting in the contest is! Not only is it a bright spot in each day, but to quote my mother, "It sure beats spittin'!"  (She said that a lot.  As usual, I have no idea ...)

Anyway, go and vote each day - you'll be glad you did.  :-)
Posted by Bridget at 5:09 PM
Labels: custom-fit, KH-KC, knitting, left-handedness, sweaters

Happy Lefty Day! I'm not but #1 son and The Mister both are.
Love the sweater. That's a lot of stitches. All sweaters are major accomplishments. I just wish there was a magic way to get them all to fit right.

Congrats on getting the back finished. It's a beautiful red!

have i ever told you the time i put aside a pair of socks i was knitting, only to discover that all that was left was ONE TOE. this WIP was sitting in the closet for 2 years because of one missing toe. ridiculous what we do sometimes.

Im having a great time with the contest this year!!!

Good for you for getting back to the sweater. I have never knit a successful sweater. I'm sweater-shy because of my failures, but I REALLY want to make a sweater that I can wear (and brag about!).

Love the color of yours. Stay with it.

Happy belated Lefty Day! I am not a Lefty, but my son is truly ambidextrous. So kind of a Lefty! Your knitting looks lovely. I hope you're feeling inspired to knit up the rest of the sweater -- because it will be a wonderful treat come the cooler days ahead.

Welcome back to knitting! The color of your sweater is just gorgeous - so perfect for autumn! I also find it difficult to come back to long forgotten WIPs, so now I have a rule not to cast on too many things before I finish the current ones! So far it works, but there are so many things that I want to make it's a real challenge to keep this promise :) Happy Left-Handers Day!!

Not just knitting but a lot of knitting! The color looks lovely. I'm glad you had some time to enjoy a little knitting. Sorry about not feeling well. The dizzy, ugh, that's the worst.

The polls were fun! Thanks for the link.