Snow, No Pictures, and Sick

Hello from snowy Philadelphia!  That was pretty amazing, I have to say!  For once, they predicted something and it did not disappoint.

I didn't take any snow pictures, because I knew I wouldn't be able to load them onto the computer.  So instead, you'll just have to look at all the other bazillions that others took and posted.  :-)

We stayed put yesterday, going out only to walk Dug and to do some shoveling towards the end of the afternoon.  It wasn't as bad as it has been sometimes, but it was better to be inside unless you had to be out.  And we only did a bit of shoveling - mostly so Dug could see the stairs when we went out - because, in only moments, it was covered again anyway.

Today we were out more, walking around, doing more shoveling, seeing how things were.  It was a lovely day, and fortunately it was snowy but not icy, which is of course what will start happening this week when it's sunny in the day and then below freezing at night.  We LOVE snow, but none of us like ice.  It was so nice to get real snow, and not some wimpy dusting, which was what we got only a few times last winter.

Now I know that it was dangerous for some, fatal for some, and life-threatening for some.  I'm not making light of that.  But I love winter, and to me, winter is snow.  If more people paid attention to local officials and stayed off the roads, and paid more attention to Mother Nature and dressed/behaved appropriately, it would not be as threatening, but people are people.  We are lucky, we know that the snow is ultimately in charge, so we work with it and do our best otherwise.  Other people are not as fortunate and lose power, have to be out on the roads and face those kinds of dangers, etc.  It can be very scary.

I'm not sure how much I'll be posting this week, since I am definitely coming down with something.  As the day has gone on, I've felt more and more like I am getting sick.  Fortunately, no fever, so that's good news.  But I have to make every effort to get to work if possible, since we had a big chunk of sick time taken away from us, and I didn't have that much left to start.  So I may very well come home from work, eat something, and that will be it!  If you don't hear from me, that may be why.  Ick.

However, I do have some exciting things to show you in a future post, and I can give you a hint: items for Harry's Hundred!!  I'm so excited that it's truly underway, and that people are wanting to participate.  So I'm hoping at a minimum I can do a post about those, and a Ten on Tuesday.

For now, I'm gonna go put my pajamas on, make some tea, and read my book for a while.  Some medicine at bedtime will hopefully start knocking whatever this is out of my system, and I'll be back to normal (well ... you know what I mean) sooner rather than later.

Have a good week, and be careful out there.  But enjoy whatever you can. 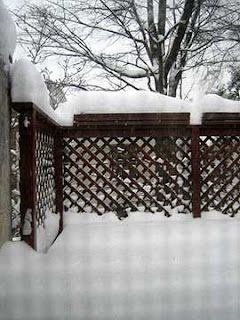 Little Buddy has been under the weather too. Hope you feel better.
Meredith

Take good care of yourself -- and stay snug and safe!

hoping you are feeling better by now.....i had to giggle just a bit when you said you finally got the snow that was predicted!!! This past storm....we were on the far western edge of the big storm, but our weather people kept promising (I took it as a promise, because, like you I LOVE WINTER!!!) 6-8". I was in heaven. We got slightly more than a dusting with about a quarter inch of ice underneath. It was awful, not pretty, and treacherous. A REAL disappointment!!!

I hope you are feeling better now. There is something cozy about being snowed in. I hope that helped you heal!