Last weekend, we had out-of-town company.  Our friends Dave and Dixie came for the weekend.  It's been a while since we've seen them.  We usually catch up when we are home in WV, but we have not been home for a while - this Memorial Day we'd planned to go, but Dug wasn't doing that great, so we stayed put.  We were excited they decided to come, since  we always have a good time with them, and they haven't visited for a long while.  We met Dave in college and became friends.  He had a job and a car, so of course he was a good person to know!  :-)  Then after college, he met and married Dixie, and we have been close with them and with their kids (now adults) since.

It was HOT here last weekend!  As in, 90+ degrees plus oppressive humidity (with "feels like" temps of 100+).  Ugh.  We weren't sure what we wanted to do, since none of us were anxious to spend time outside.

Enter Politicalfest 2016.  As you likely know, the Democratic National Convention is in Philadelphia this week.  Well, Politicalfest is a week-long event, where you pay a single fee ($15.00 for adults), and you have access to each of the events for the whole week.  There are seven different locations that have created special exhibits related to the race for President and political history, and shuttle buses to take you from one place to the next.  Fortunately, our guests wanted to go (they chose it from a list of choices we'd given them), so we started off bright and early.

Here are some of the highlights from the various locales. 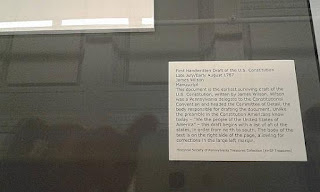 The first handwritten draft of the Constitution, by James Wilson.
(Sadly, the photo of the card describing it turned out, and the document photo didn't). 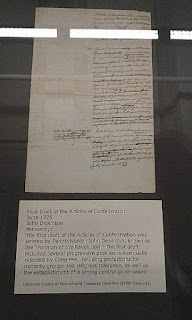 The first draft of the Articles of Confederation, by John Dickinson. 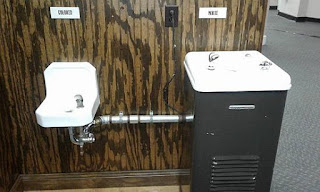 One exhibit was about the fight for voting rights and the Civil Rights Movement.
I remember seeing this kind of thing as a child, once on vacation, and being so confused. 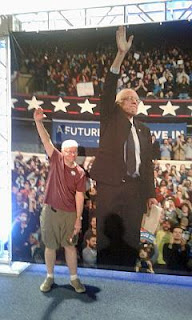 The Tim ... making people wonder about Feeling the Bern ...


Chairs!  We saw lots of chairs. 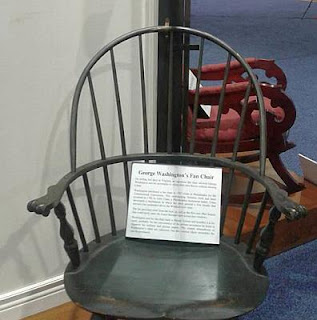 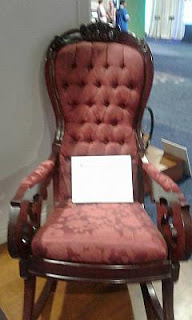 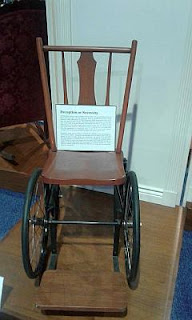 FDR's "public" wheelchair.  It was specifically made to fit into the opening of his desk. 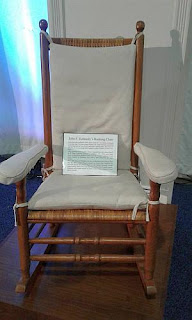 We saw one of Mary Todd Lincoln's inaugural dresses.  Apparently, she spilled a drink on her first dress, so this was made as a replacement overnight! 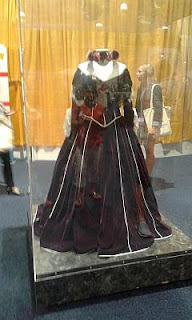 There was the car provided to JFK and Jackie on their trip to Texas. 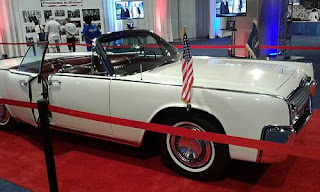 Also, a replica of Air Force One that brought the Kennedys to Texas on November 22, 1963; and the room where the body of JFK was on the flight back to DC. 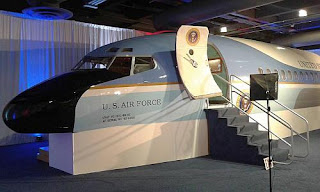 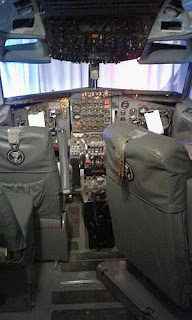 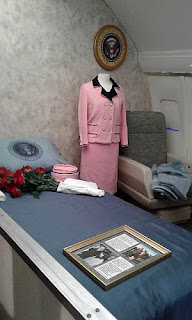 This photo of Gerald Ford kicking a soccer ball with Pele amused me greatly! 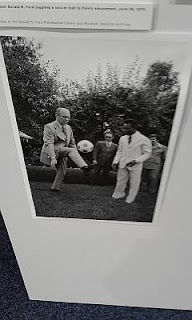 We posed with our friends in front of the DNC "Rocky" donkey. 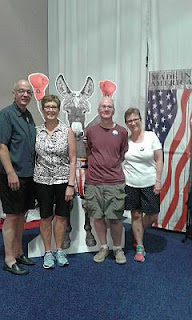 And then The Tim and I got our DNC "Rocky" on ...
(makes the Gerald Ford photo above look downright boring, no?) 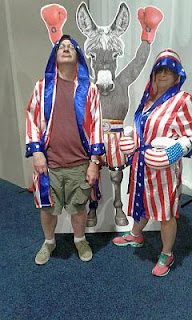 On our way out, a local reporter interviewed us before we got on the shuttle bus.  I talked to her first, and then The Tim - who apparently used the time I was talking to collect his thoughts.  He ended up being on the news that night, and then told us that a) they left out his most important talking points, and b) in the print article, he was misquoted!  We decided we were going to start calling him Local Man, a la The Onion ...

It was a blast, it was interesting, and it was a wonderful way to spend the day.  I would have wanted to go, even if we had not had company, but I think they are likely to remember it for a while.  It would have been hard for us to cover so much ground and visit so many places in one day otherwise.

And they never would have been able to experience the wisdom of Local Man ...
Posted by Bridget at 5:42 AM
Labels: company, Politicalfest-2016, weather

Bridget- Interesting. I didn't realize they had exhibits- so cool.

Fascinating! I love the photos of you all enjoying the exhibits.

Never, EVER underestimate the wisdom of Local Man .....even if he IS misquoted.

This is so cool!!! Glad you had such a good time.

So cool that you went! We got to see artifacts otherwise that we surely would not have. !